I love Walmart Camping for several reasons. Years ago I saw the campers parked at our city’s Walmart, and it looked like such a fun thing to do. I’m really not sure what drew me to the idea, other than maybe how carefree and spontaneous it looked. At that time, the camper we had didn’t have a bathroom in it, which for me, is pretty important on my needs list.

Fast forward a few years to when we had a camper with a functioning bathroom, and a generator, and planned a last minute trip to BC – Walmart Camping became something I crossed off my bucket list! We had just been in the British Aisles that summer and it was so cold there, so we literally decided in the airport on our way home to head to Kelowna with our trailer for a week of hot, sunny weather before summer ended. We arrived home at midnight and left town by 8am the next morning! We had our camper on the back, and nowhere booked to stay.

We spent the first night at a truck stop, and the next three between two Walmarts in Kelowna, and it was great. Since then, our family members have started Walmart Camping a bit, and we’ve done it several more times. Here are the pros and cons to staying at Walmart and truck stops:

1. It’s Free. This is a major plus, especially if you’re just driving through a place, and you don’t need to spend much time there. It feels like a waste of money to book an RV park just to sleep.

2. It’s Last Minute. This could be seen as a con for some people, but the benefit of sleeping at Walmart is that you don’t have to book ahead. We like to drive until we feel like we’re done for the day, and then find the next Walmart or truck stop, and pack it in for the night. We don’t always know how far we want to make it, so booking ahead is a problem for travel days. Last minute stops allow us freedom in our traveling and make it much more relaxing than, “we’re so tired but we have to make it to that city where our booking is tonight,” or “it’s so early, and we could have kept driving for hours if we didn’t have this booking here.”

3. You can shop! We often need either a couple small grocery items, or something for the truck or trailer, and Walmart has it all. Most have a tire shop too, which is great for being on the road.

4. Starbucks. So far, at every Walmart we’ve stayed at, there has been a Starbucks within walking distance for me to go pick up my mobile order in the morning. It’s awesome. Not to mention, there are usually lots of other stores and restaurants nearby as well.

There are a few downsides too.

1. You’re not level, or set up. Since you’re not unhooking your vehicle for any length of time or at all, or putting your jacks down (or shouldn’t be) you can’t level out, so we sometimes sleep with our heads or feet higher than we’d like. Just do your best to find a flat spot when you park in their designated area. You can’t set up full camp either, so you’re living in limbo a bit.

2. It can be bright and loud. As it’s meant to be an overnight thing, don’t plan to sleep in. Walmarts are always in high traffic areas, so there’s going to be noise from that. They also have bright lights that illuminate the lot overnight. Patrons start showing up early to shop as well. We’ve had some Walmart mornings where people park right by us and are walking past on either side to get into and out of the store. Truck stops will be loud as the semi’s are coming and going all through the night, and most drivers leave their trucks running while they sleep to control the temperature inside. 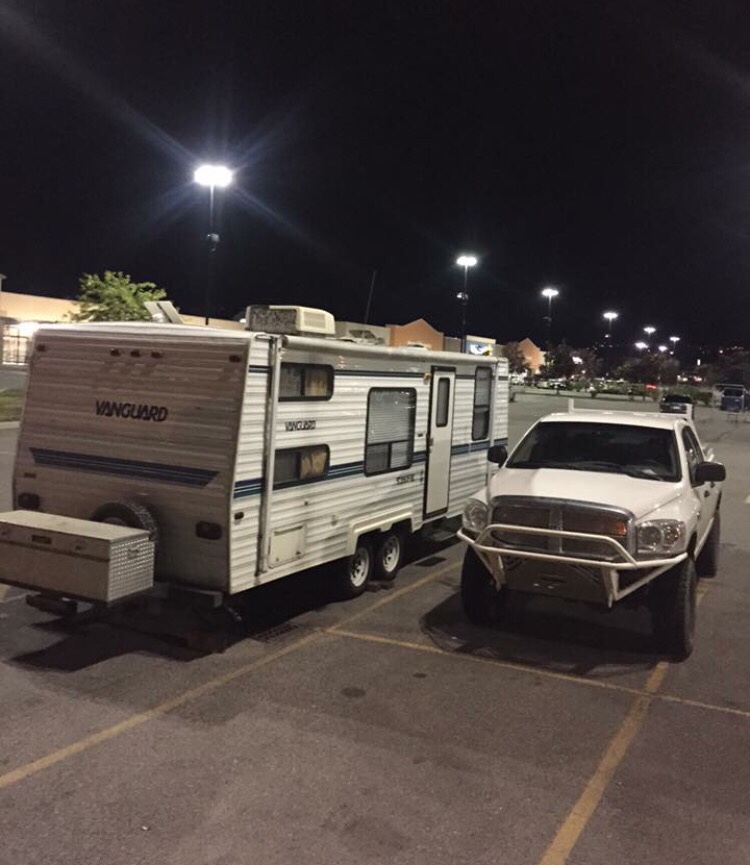 3. You can’t leave your trailer there unattended and you shouldn’t unhook. (I know, in the picture just above we’re unhooked! On that day we did this to block the spot next to us because a super huge and loud motorhome bus had squeezed in beside us the night before and ruined our sleep and space. This is potentially another con – you have to deal with other RVers who may or may not be cool, but you do this at RV parks too). You’re really only supposed to spent one night, or maybe two, but they don’t want you actually camping in their lot. It’s meant to be an overnight rest stop.

That means that when we Walmart camp, we take the trailer behind us everywhere we go during the day. This gets to be a bit of a pain after a while. Walmart Camping is great for a few days, or for when you’re driving to and from your destination, but it’s not ideal for long term stays.

4. No hook-ups or dumps. This isn’t really that big of a con, but it needs to be mentioned. Make sure the appropriate tanks are full and empty before you go, and that you have a generator if you want power. There should be a dump at a service station in town somewhere. If you google it, you can find it, but it’s not likely to be at Walmart or close by.

Despite the short con list, the pros way over-deliver for us and we still camp at Walmart or truck stops on nearly every road trip.

We usually do steaks, or a nice meal for supper, and a pancake breakfast too, because who says you have to eat bad food just because you’re staying at Walmart? 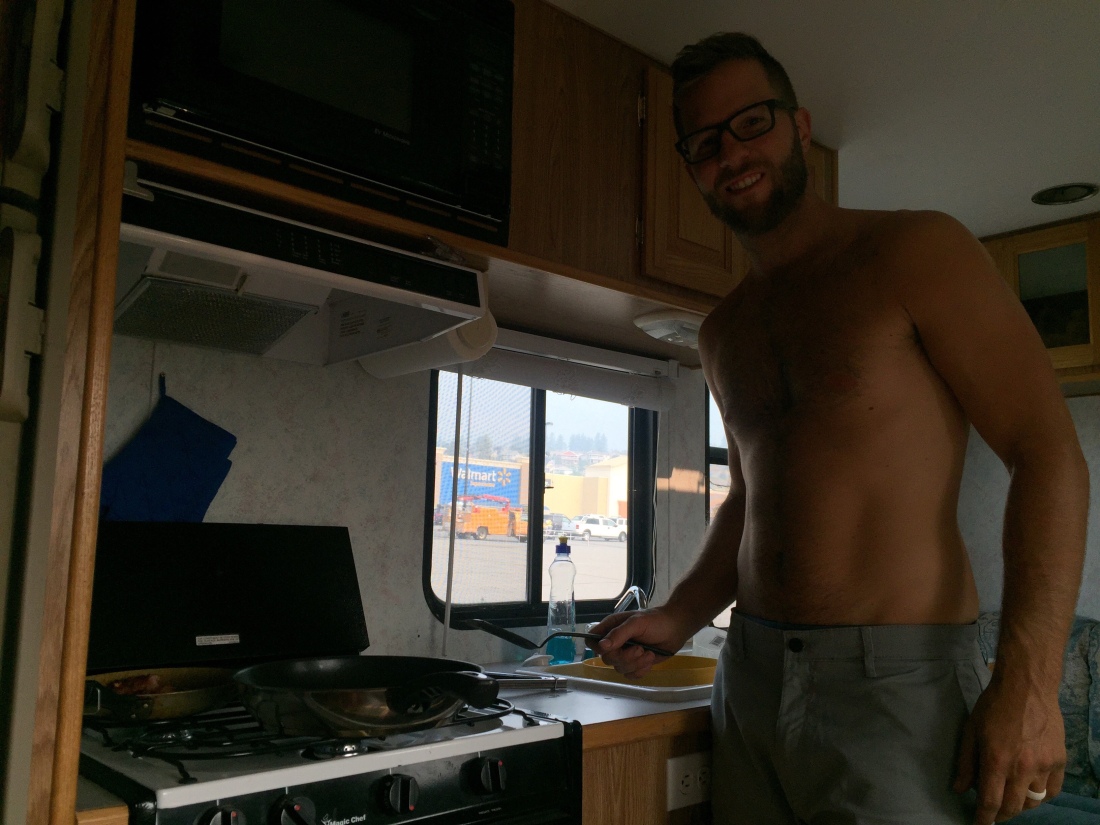 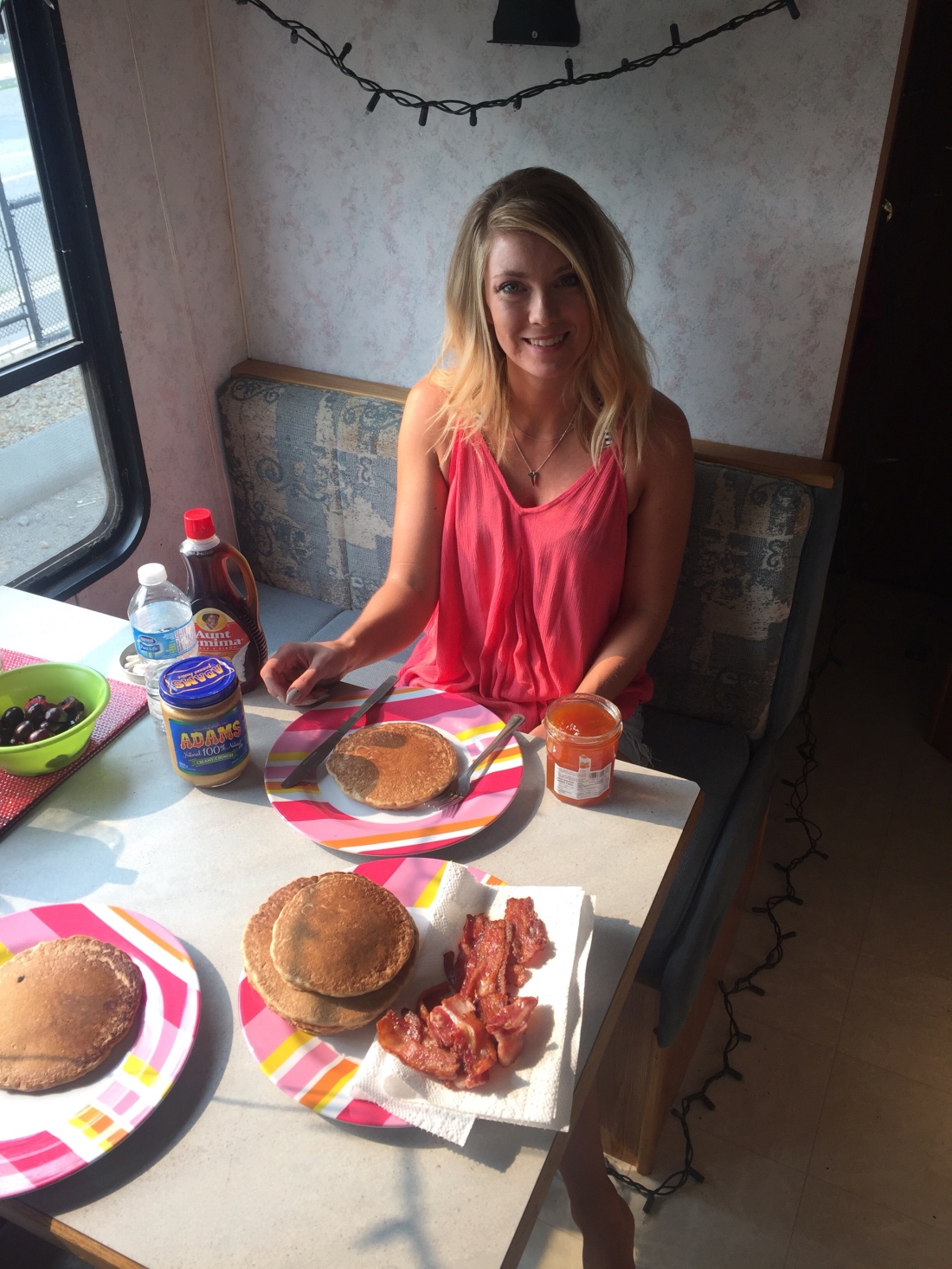 One more brief, yet important point! Make sure you call ahead to ask for permission, because not all Walmarts allow camping! Many have terminated the offer due to people being idiots and leaving dog poop or trash behind, or even emptying their tanks in the lot! Who does that? Don’t be an idiot. Super-centres are a good bet to stay at, but we’ve gotten a courtesy ticket for staying at a Walmart in a mall before. Run inside to buy something or fuel up as a thank you if you’re sleeping at a truck stop.