We’ve had a very busy January at work (and by “we” I mean “me,” as Greg’s been enjoying all of the public holidays). I’m used to having two weeks off over Christmas and New Years, and then spending the next few weeks of work struggling to get out of bed and motivate myself to get back into the routine, after having to dig my car of out of the snow in the dark, minus 40 weather. This year, of course, with an industry and country change, brought a big life change, and a significant change to my January! I’ve not had more than two days off in a row in a long while, (maybe at all since I started my job), but with that, comes no dread of returning to work, and no broken routine. It’s a good thing I love what I’m doing! January is one of the busiest months in the Cellar Door, and we’ve been working hard, for long hours, in the heat! We’ve had many days in a row of higher than 30 degree weather, and heaps of sunshine. I’ve been spending my mornings going for jogs along the ocean instead of digging my car out of the snow, and getting sun burnt instead of frost bitten!

With all of that work, I’ve been very tired, but when Greg and I realized I had a weekend off, we decided we needed to take advantage of it and go see some more of this beautiful country we’re calling “home.” As we did a “rustic” trip last time (slept in the car, next to a stream on a mountain and hiked 20kms), we decided to do a city trip this time. We chose Wellington, New Zealand’s capital, a four hour drive for us; on route, there is the Wairarapa wine region, with Martinborough in it, famous for its Pinot Noir, something Hawke’s Bay is too warm to do much of.

We left early Saturday morning and headed through many cute little towns on the way to Martinborough. We wanted to fit in a few wineries before our 1:00pm appointment at Ata Rangi. 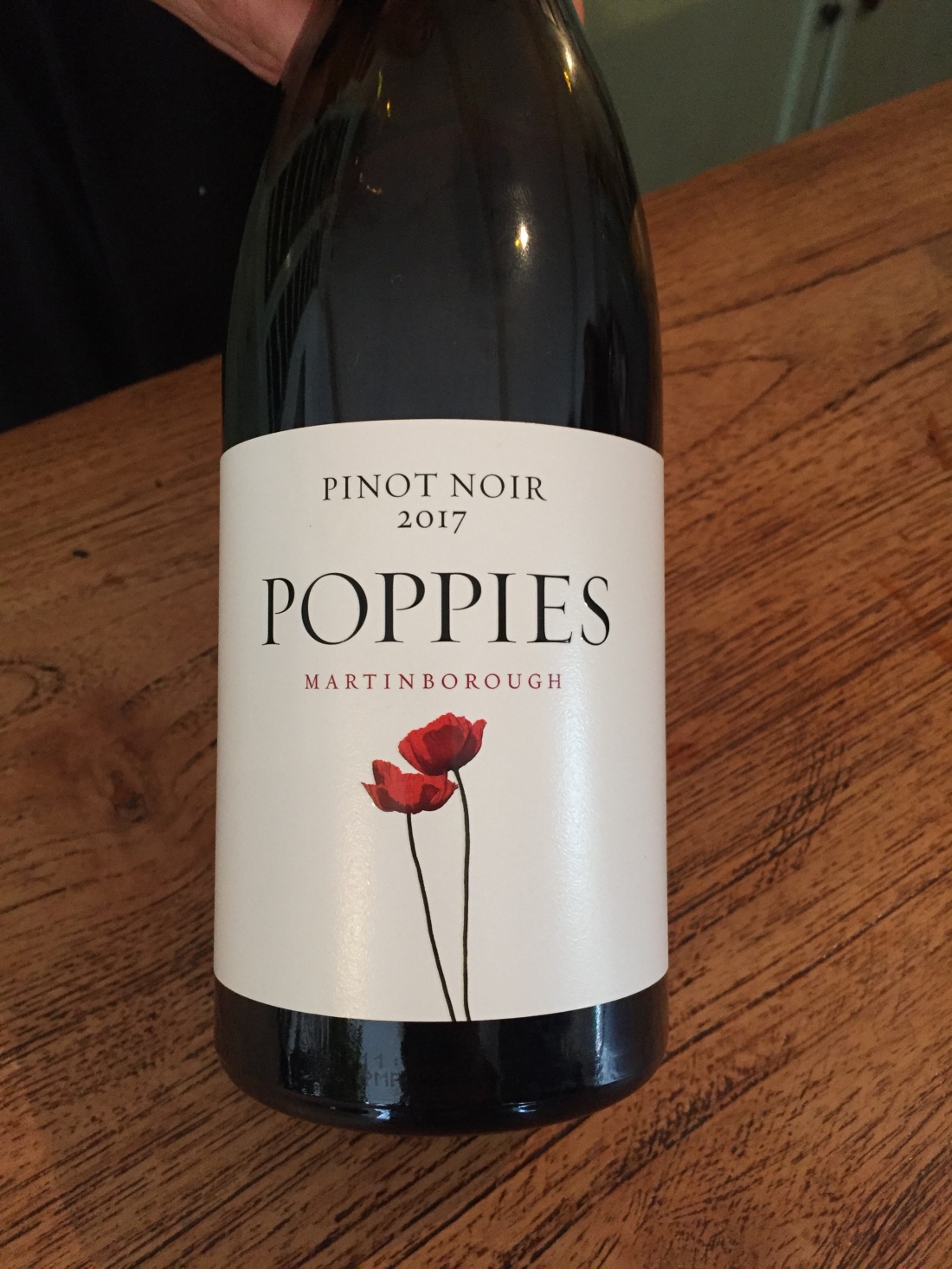 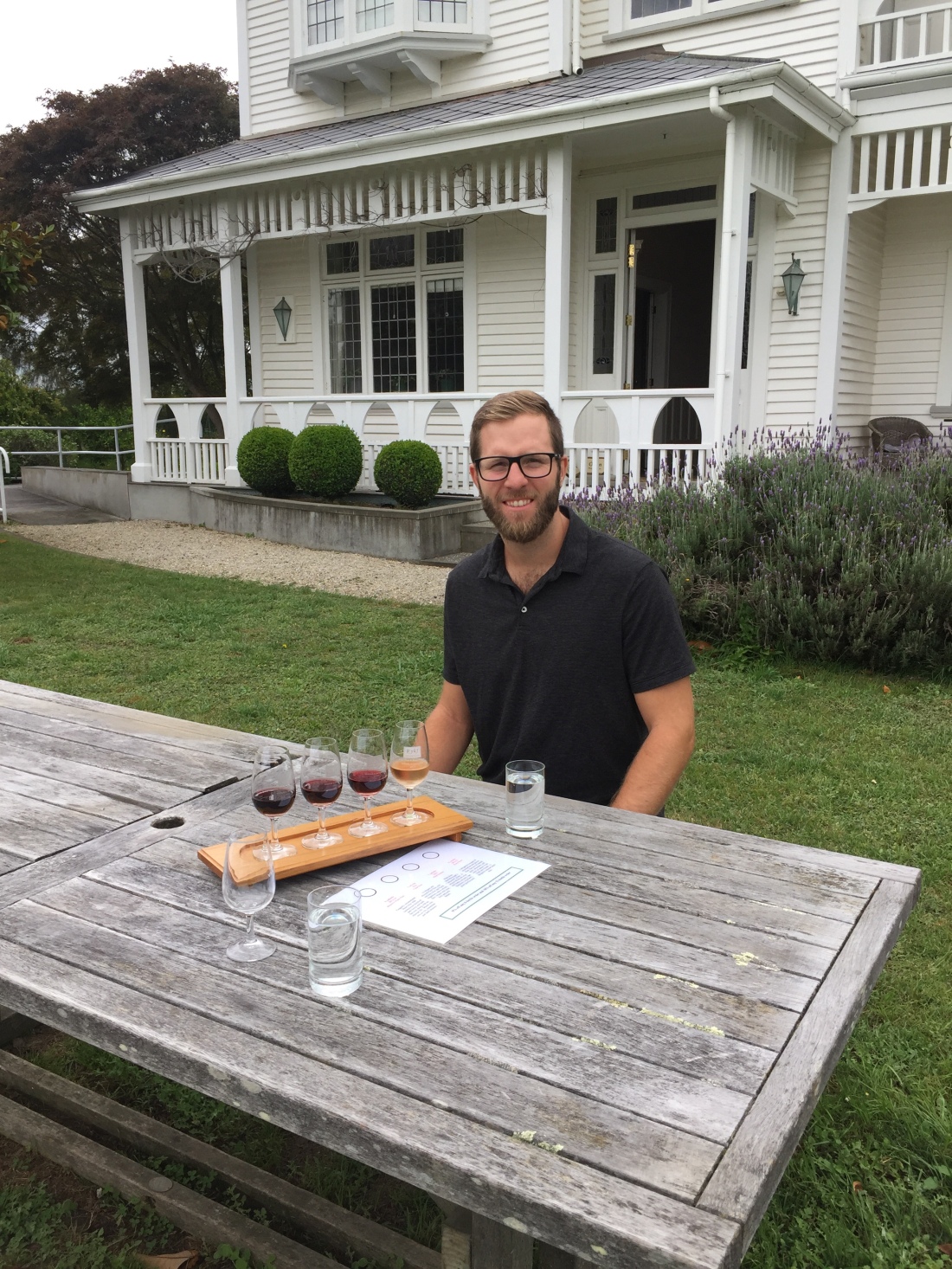 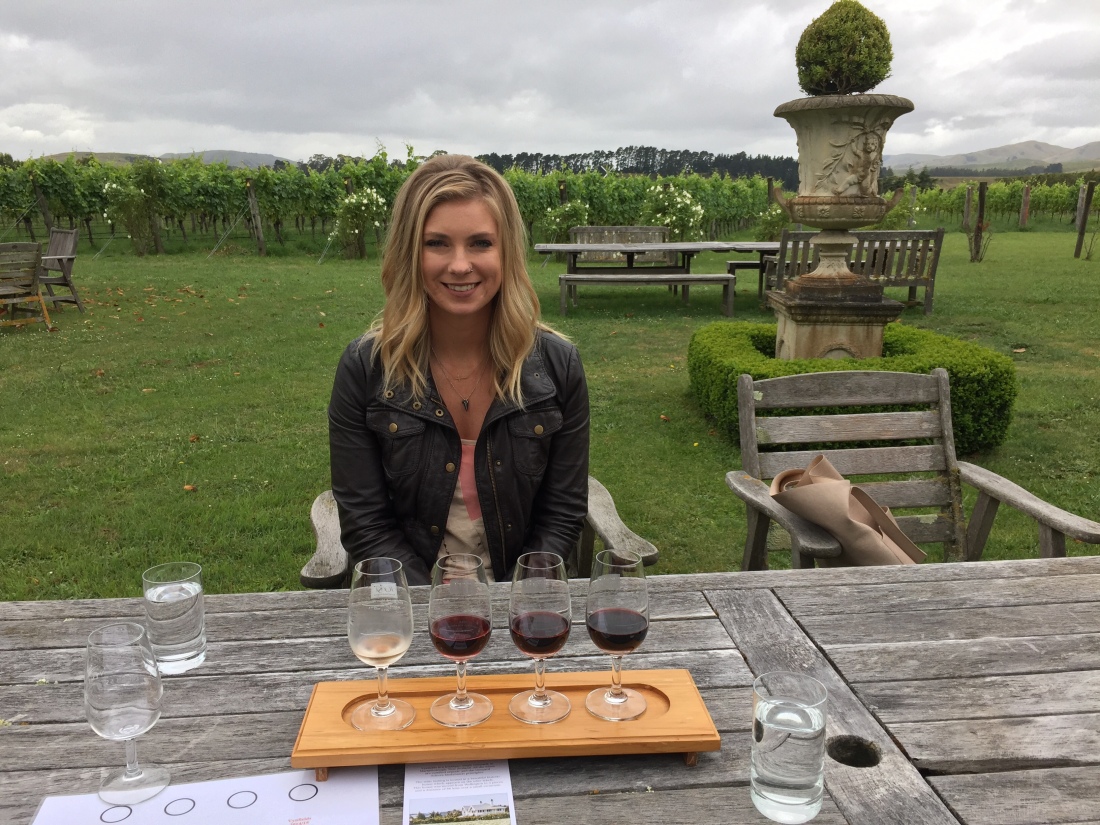 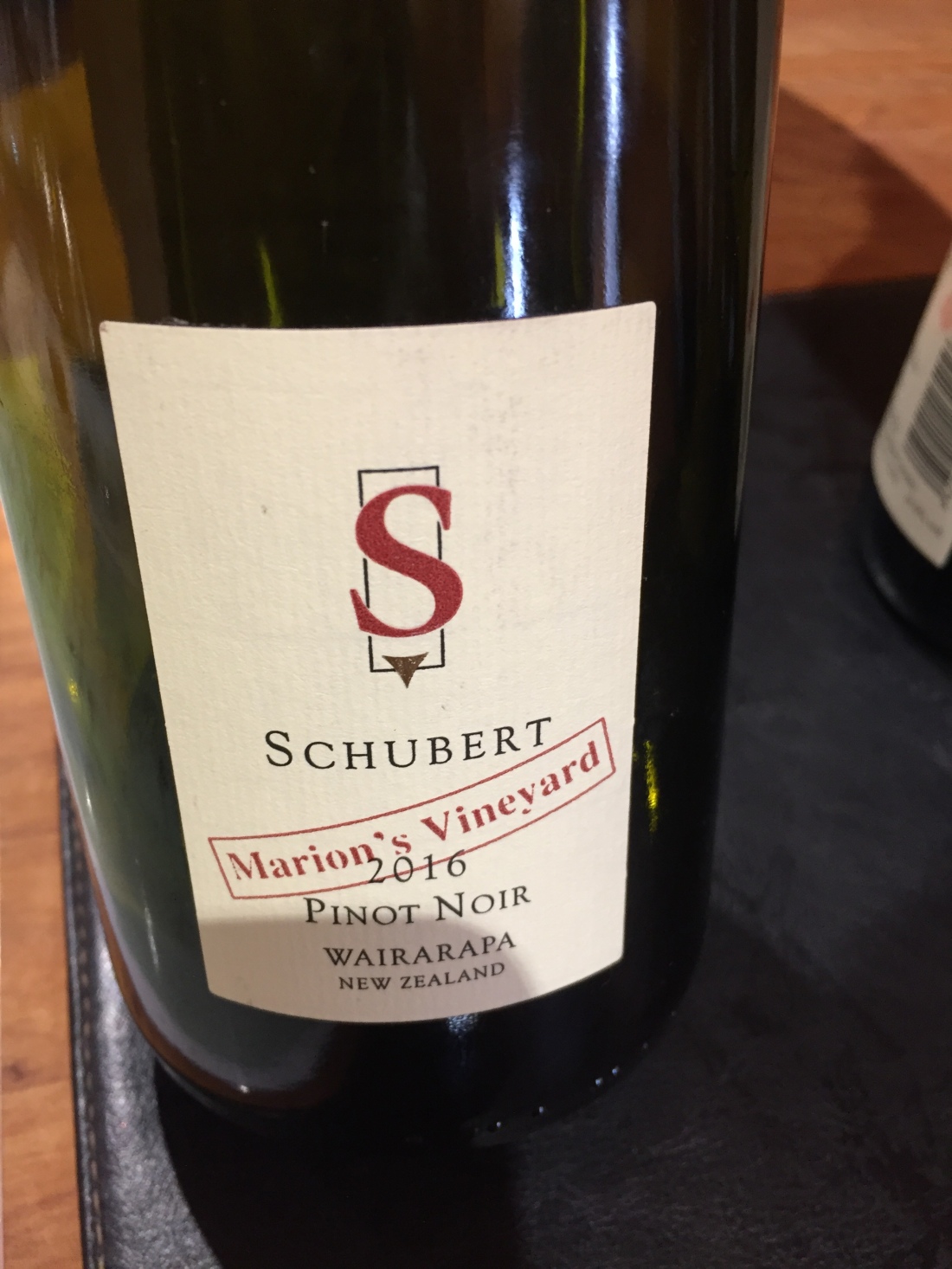 We visited Poppies, Vynfields, and Schubert during the lunch hour. They were all very small production, beautiful places, and featured the Pinot Noir we were after.

We ran into a family at Poppies that lives in Wellington, that I had done a tasting with at Church Road recently; we all recognized each other, and stopped to chat! They told Greg how great of a time they had with me, and that they could tell how passionate I am about wine and the process of making it. That’s definitely true, and I’m glad it comes through to people who visit me in the Cellar Door!

We had a beautiful, seated tasting, with only 10 people at Ata Rangi, and got to hear a bit of their history, as well as the history of Martinborough. 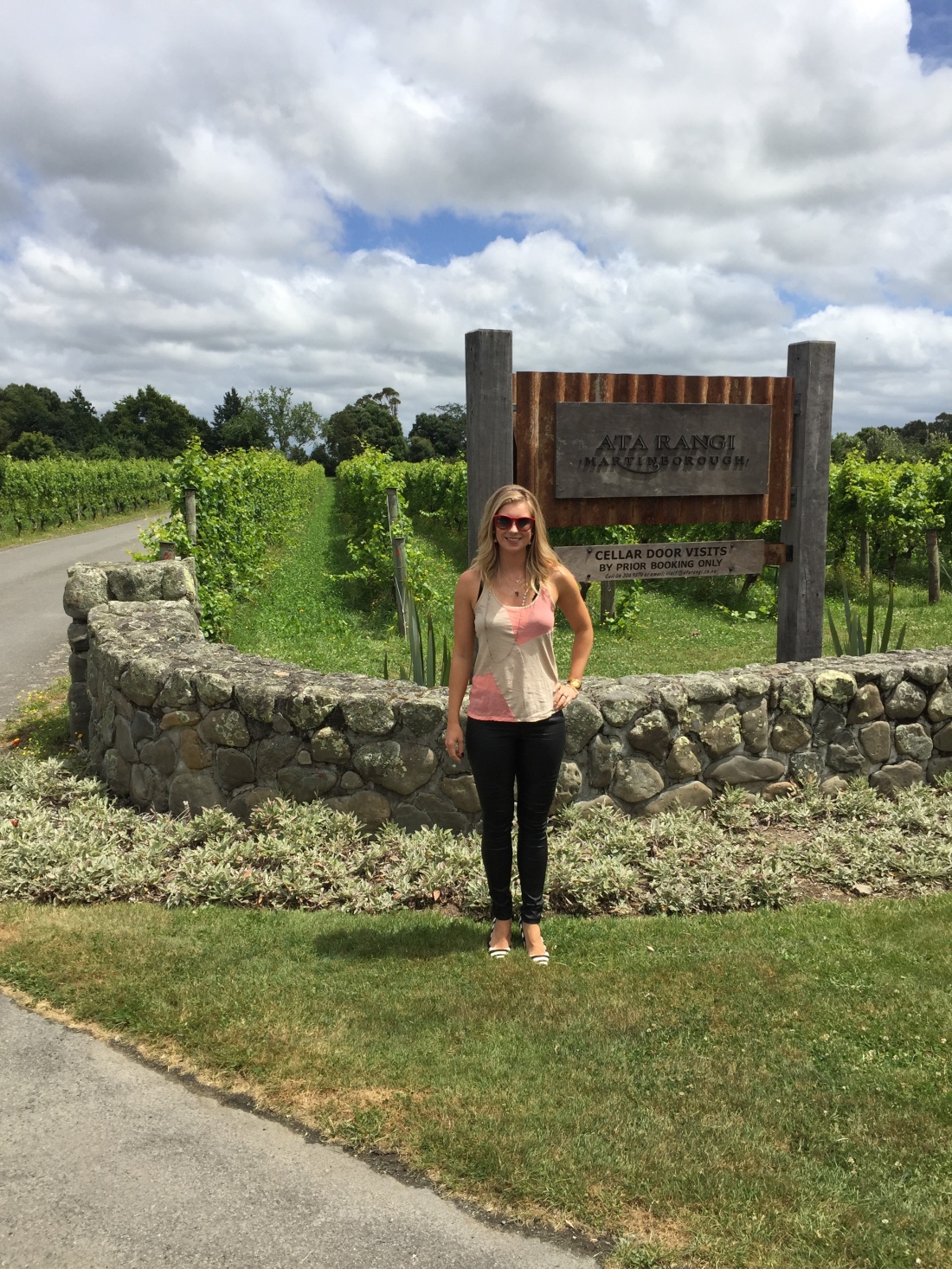 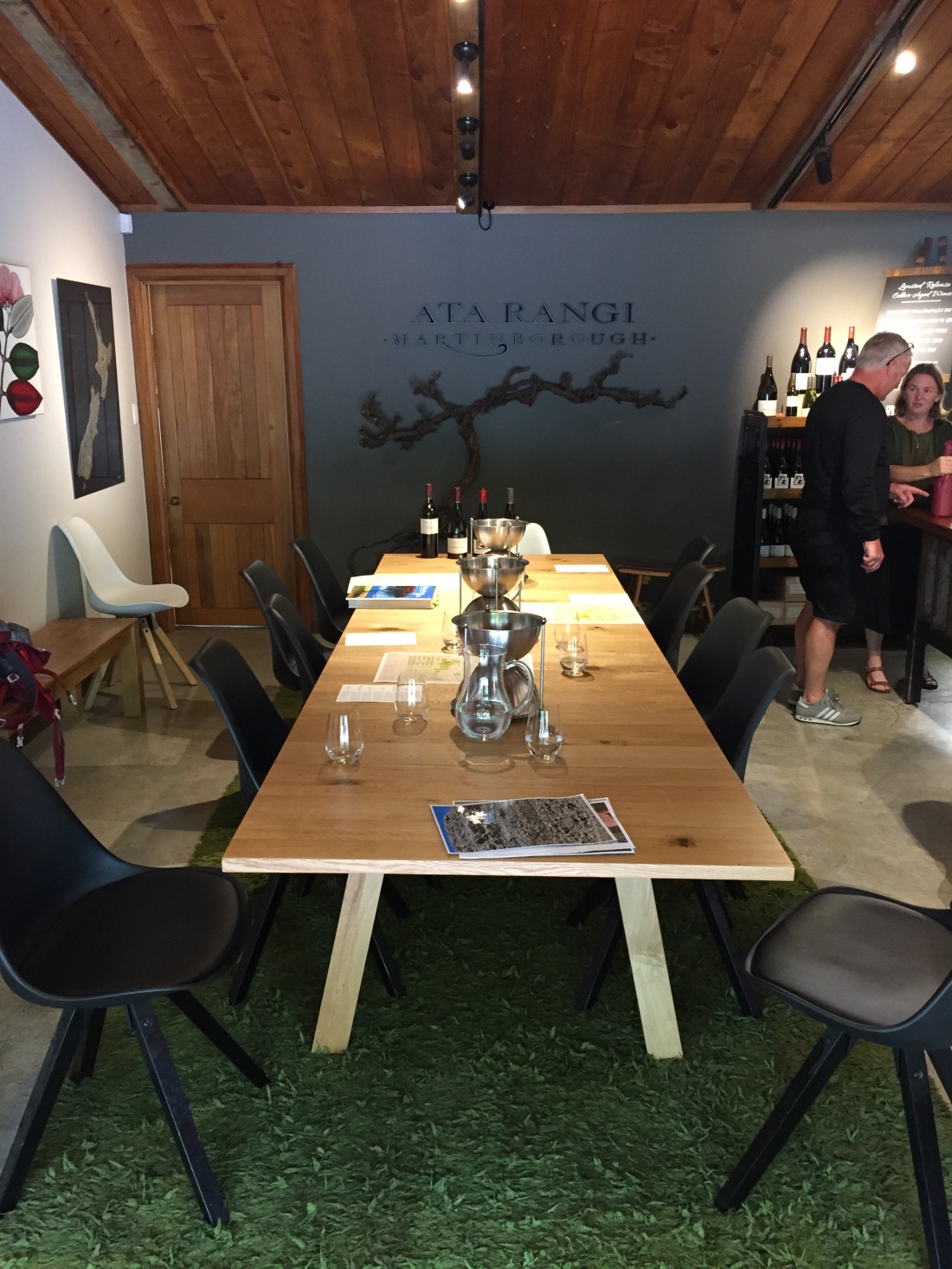 After Martinborough, we headed into Welly! The first stop was the mall, where I bought some necessities that are harder to find in Hawke’s Bay, and looked for some clothes. Greg and I are noticing that the styles here are very different than in Europe or North America. I didn’t find much, but got a few things. We checked into our Airbnb in Island Bay, and then headed into downtown. 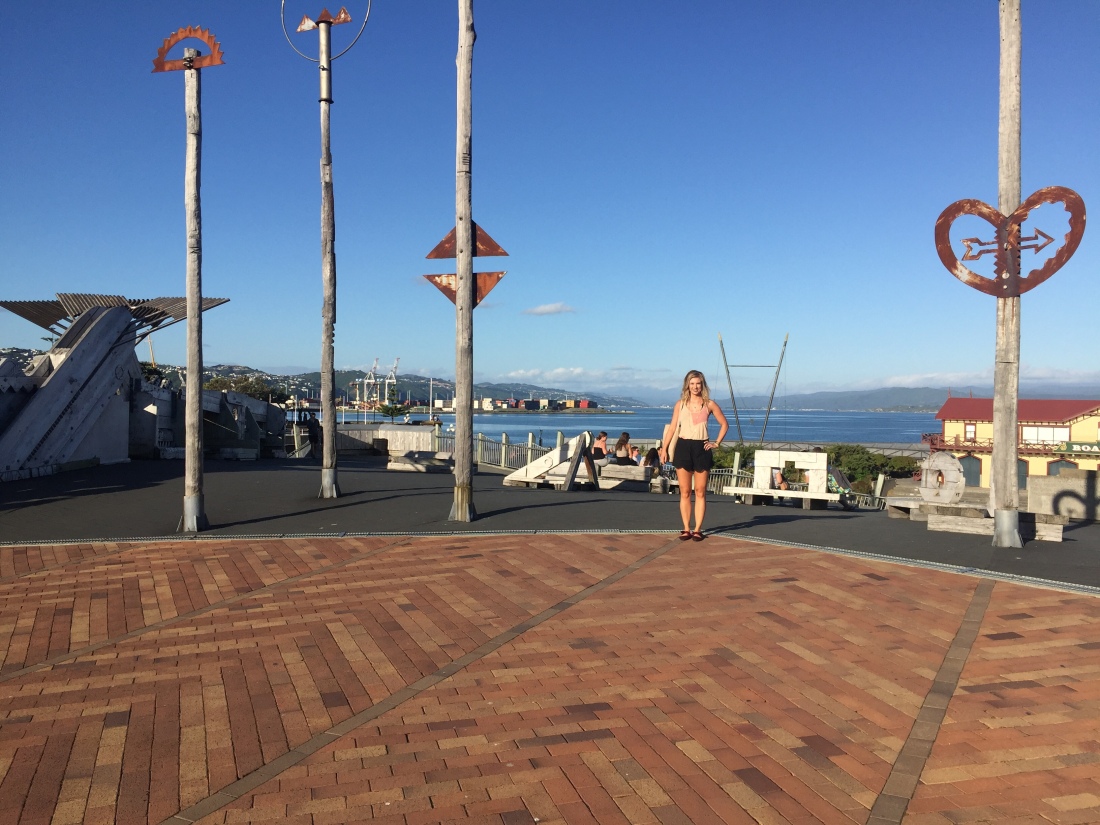 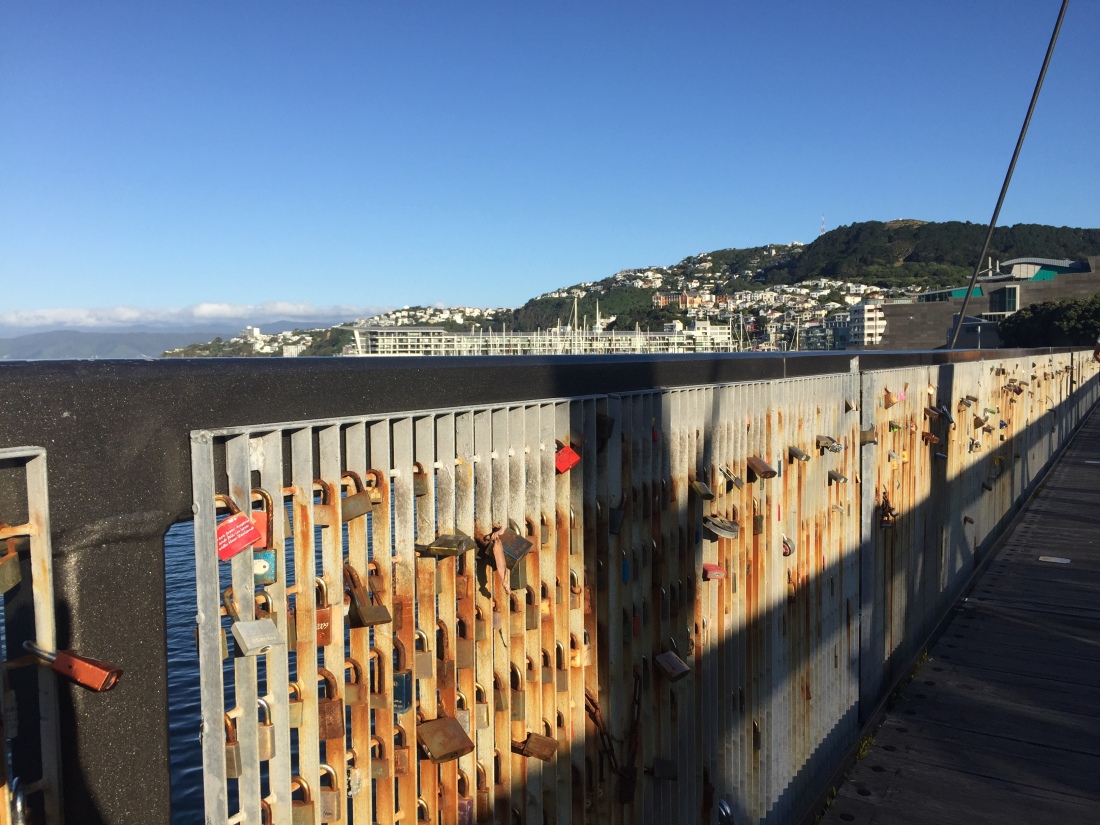 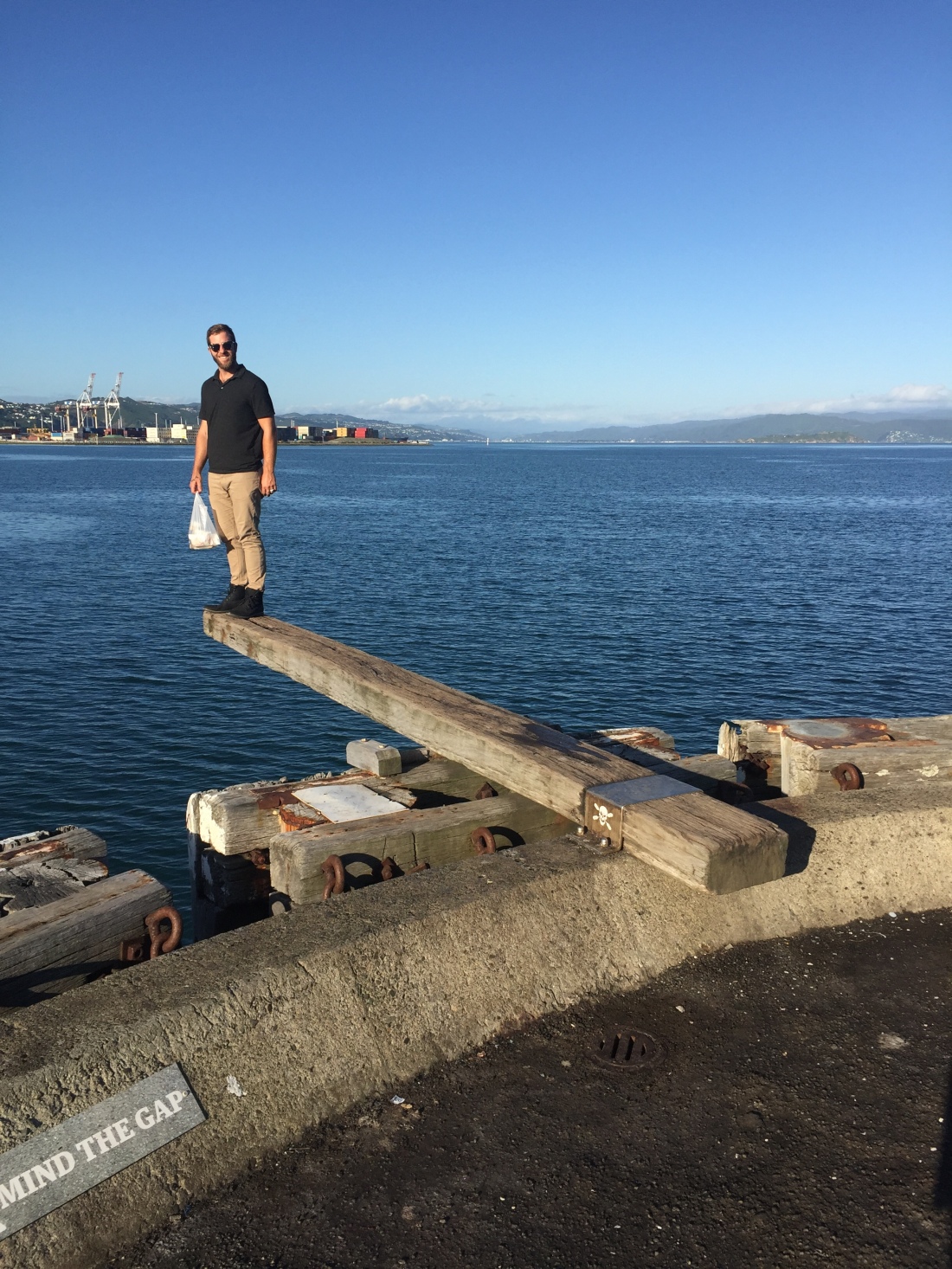 We had a walk around the waterfront, checked out Cuba Street and the candy store, Nicnacs, before having a pint at Hashigo Zake, a craft beer bar. 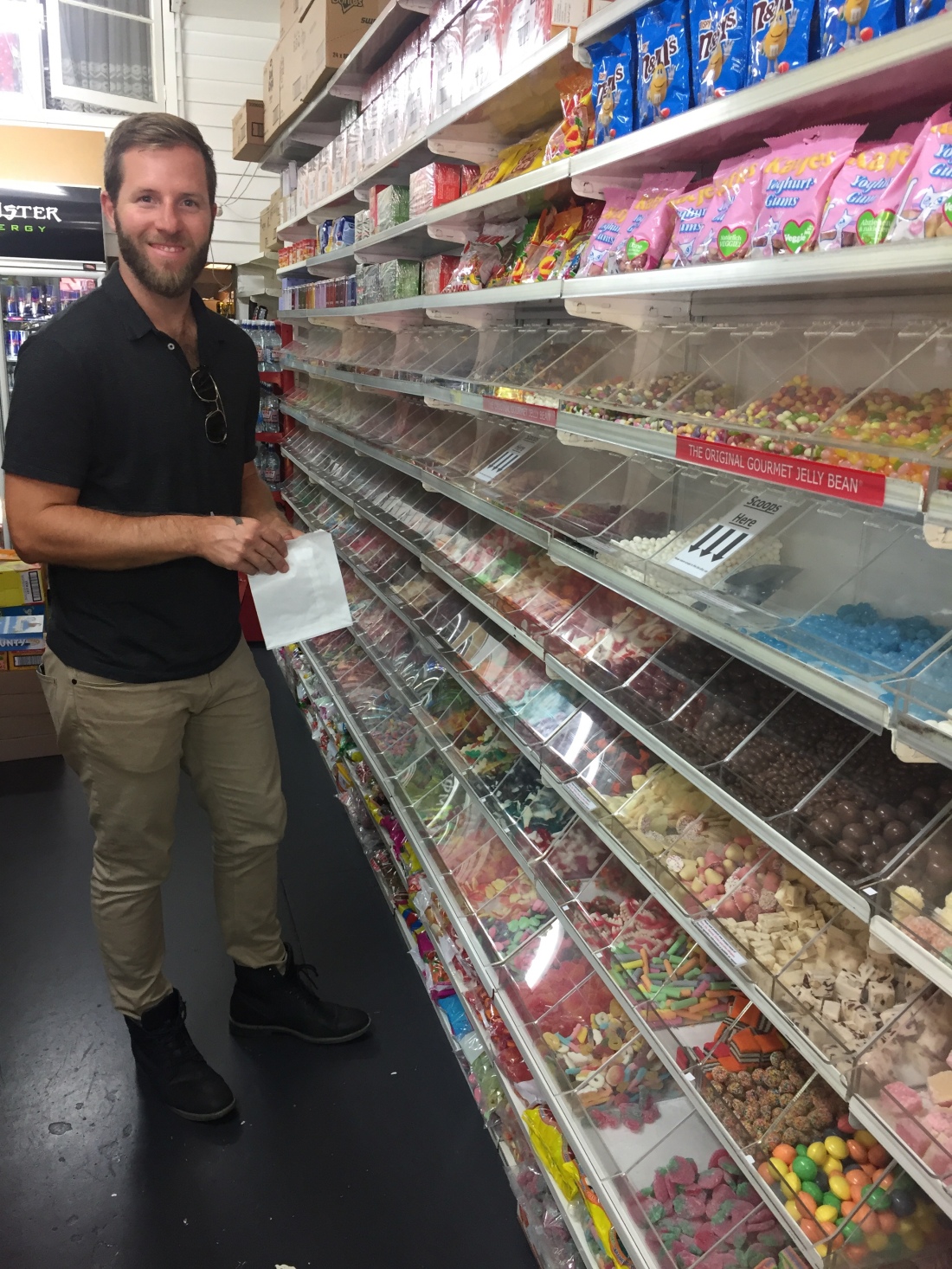 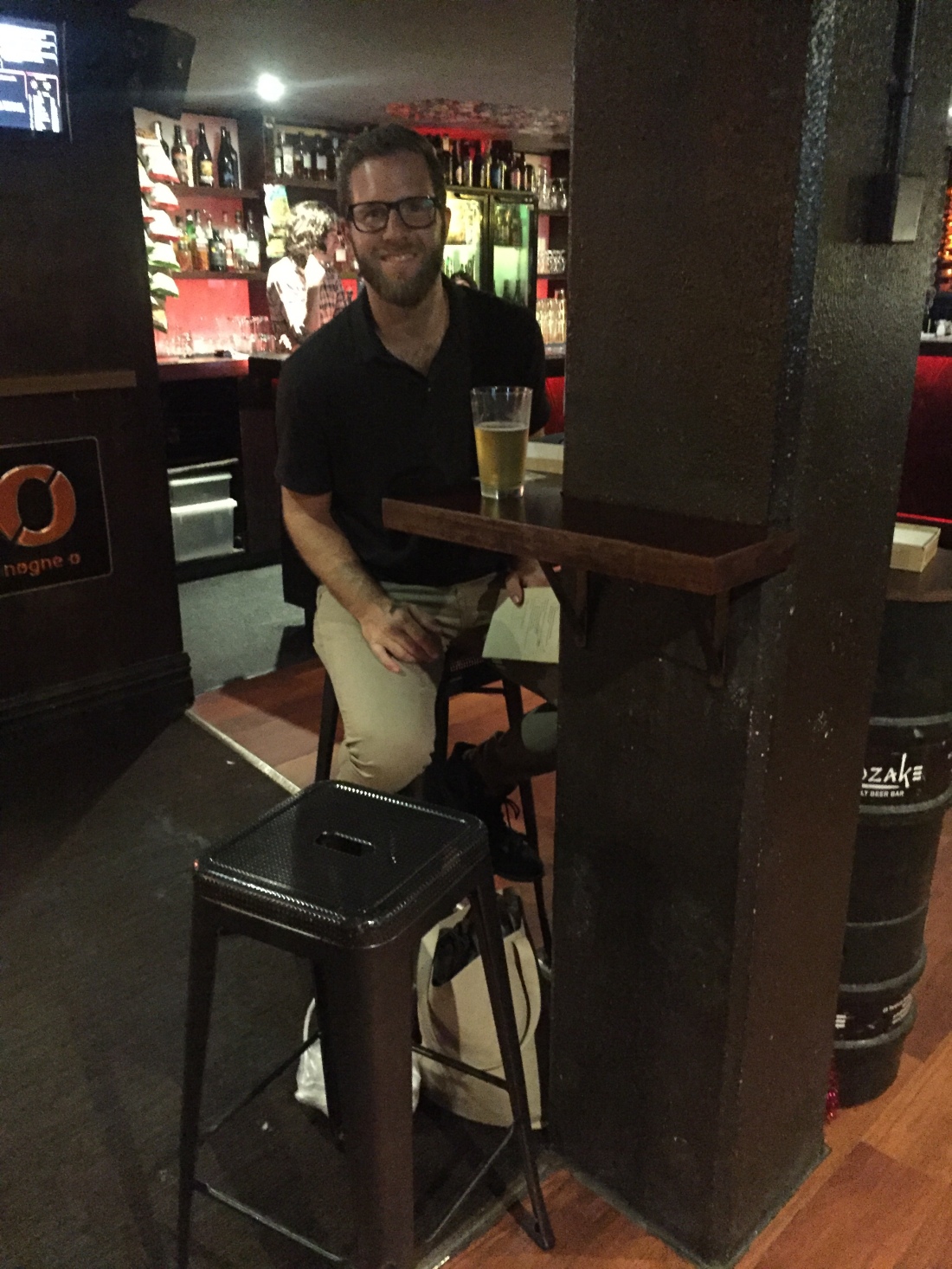 We had dinner at Chow, an Asian inspired place, that surprisingly was able to accommodate me very well. We loved their food, and atmosphere. 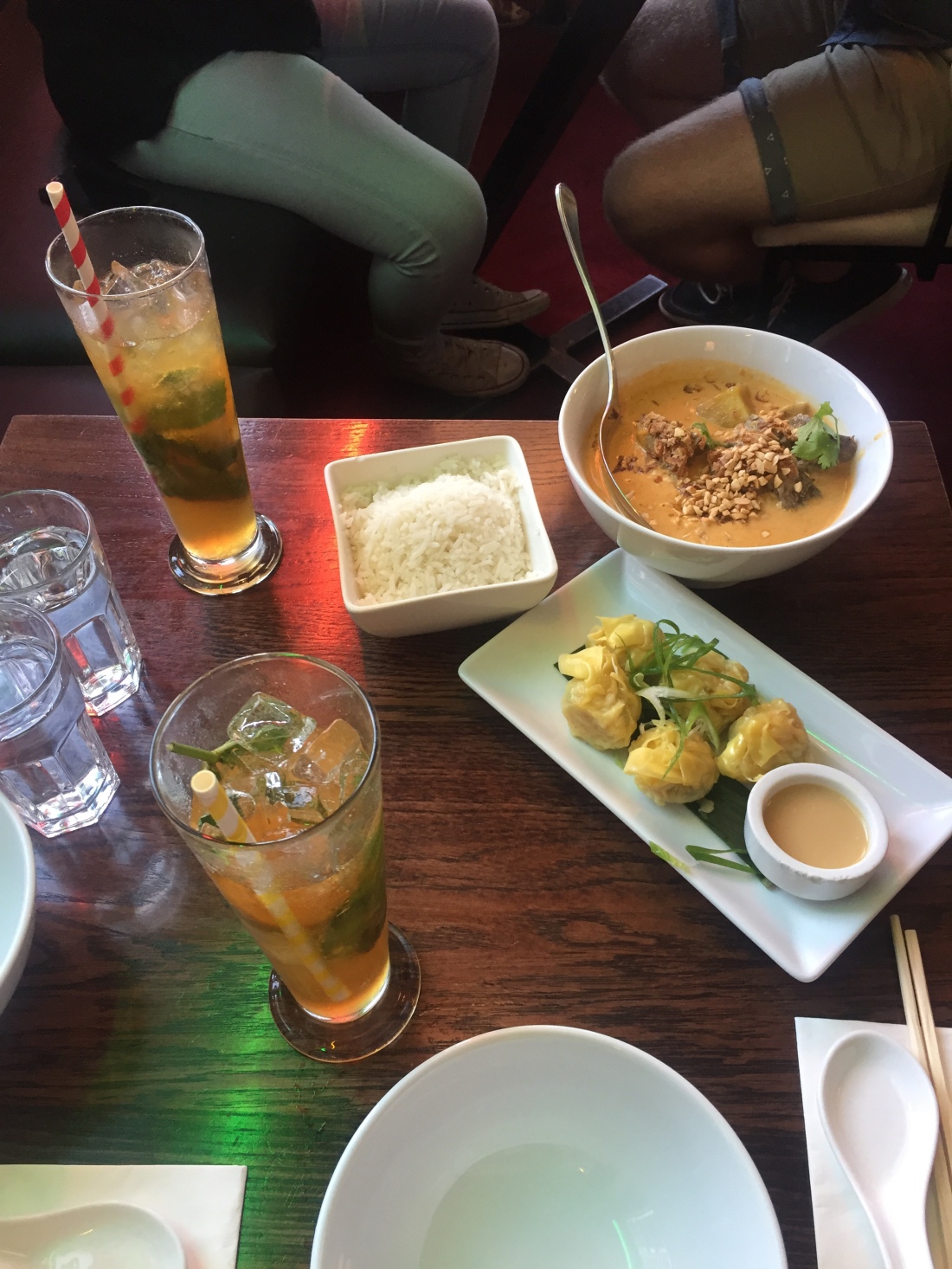 We finished the evening at Noble Rot, a famous wine bar in Wellington, where we got a Napa Chardonnay, just to remember what they taste like, and did a blind flight of three reds from around the world. We did decently well on our guesses, and enjoyed having some red wine from the old world again. 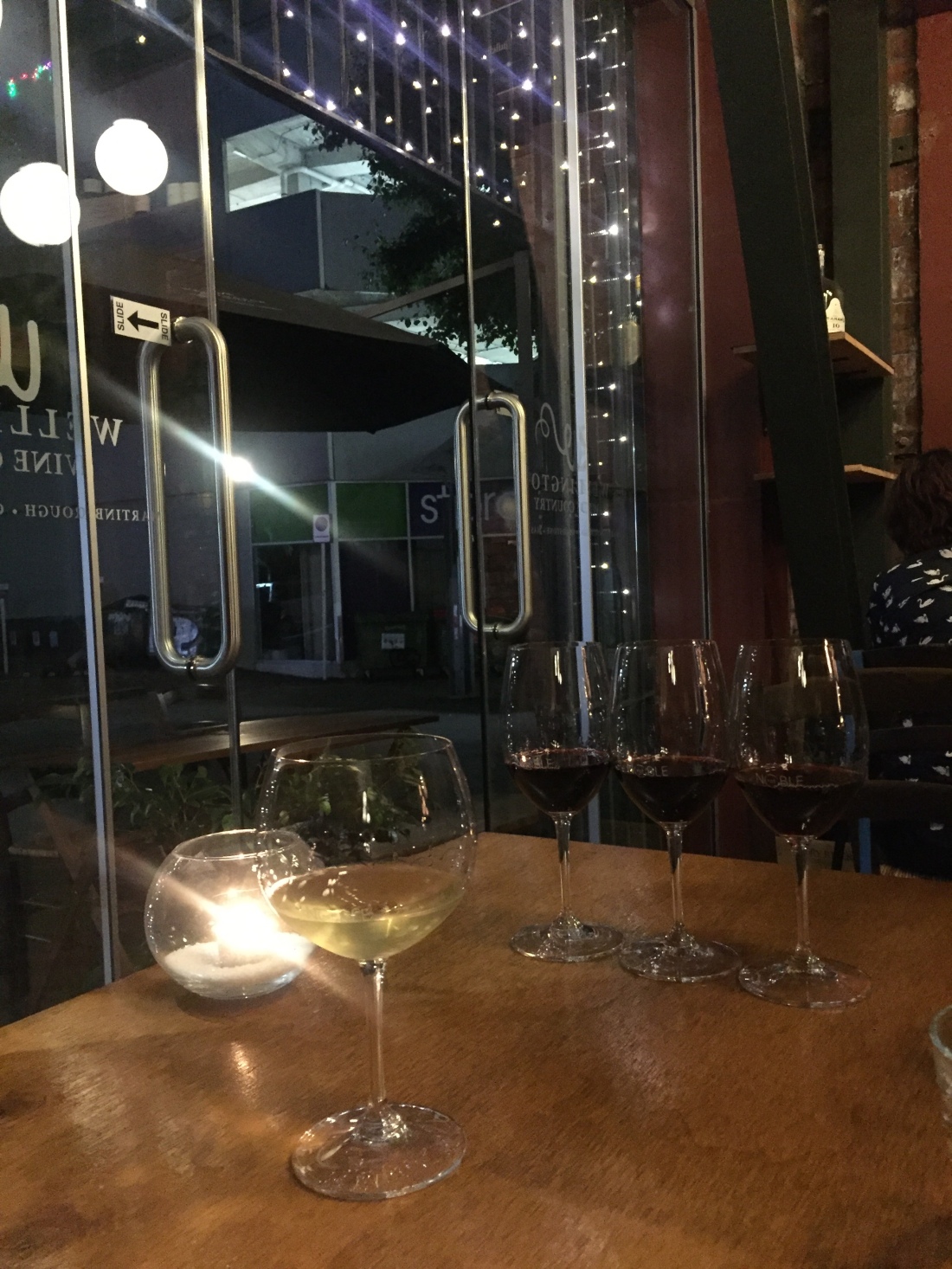 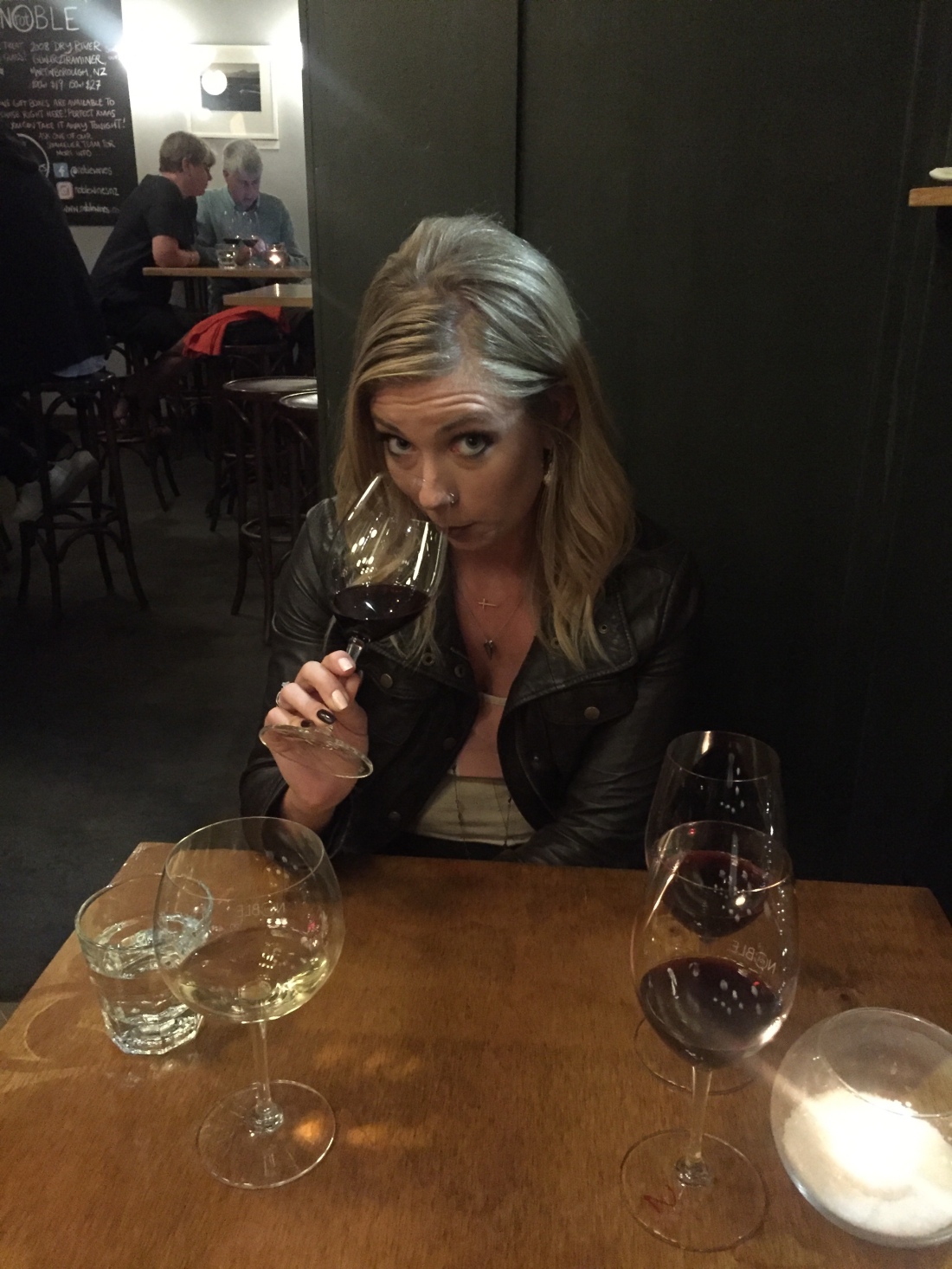 Sunday morning, we slept in a tiny bit, but had too much on the agenda to laze around! We started with a trip to the top of Mount Victoria for 360 degree views of the city. It was beautiful up there, and definitely worth a see! 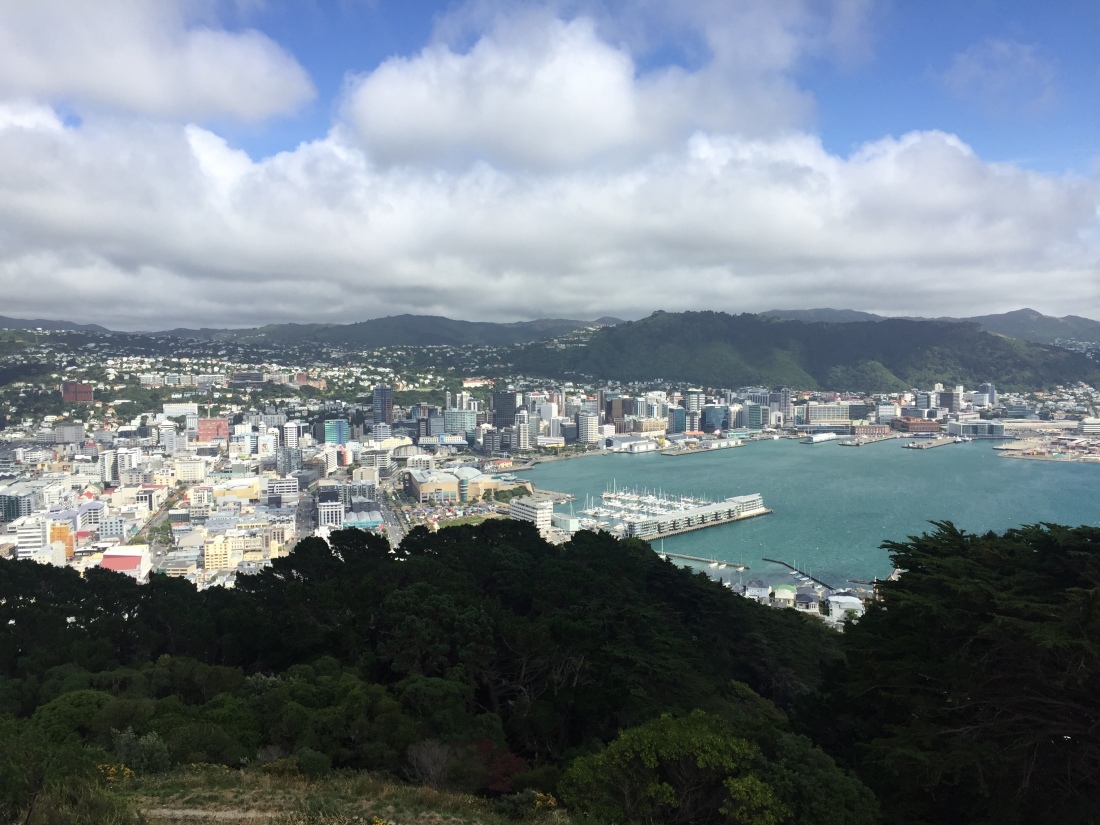 We checked out the Te Papa Museum, where we learned about some of New Zealand’s history in the First World War, and saw their amazing, more than double life size models of soldiers; they have been crafted in incredible detail! 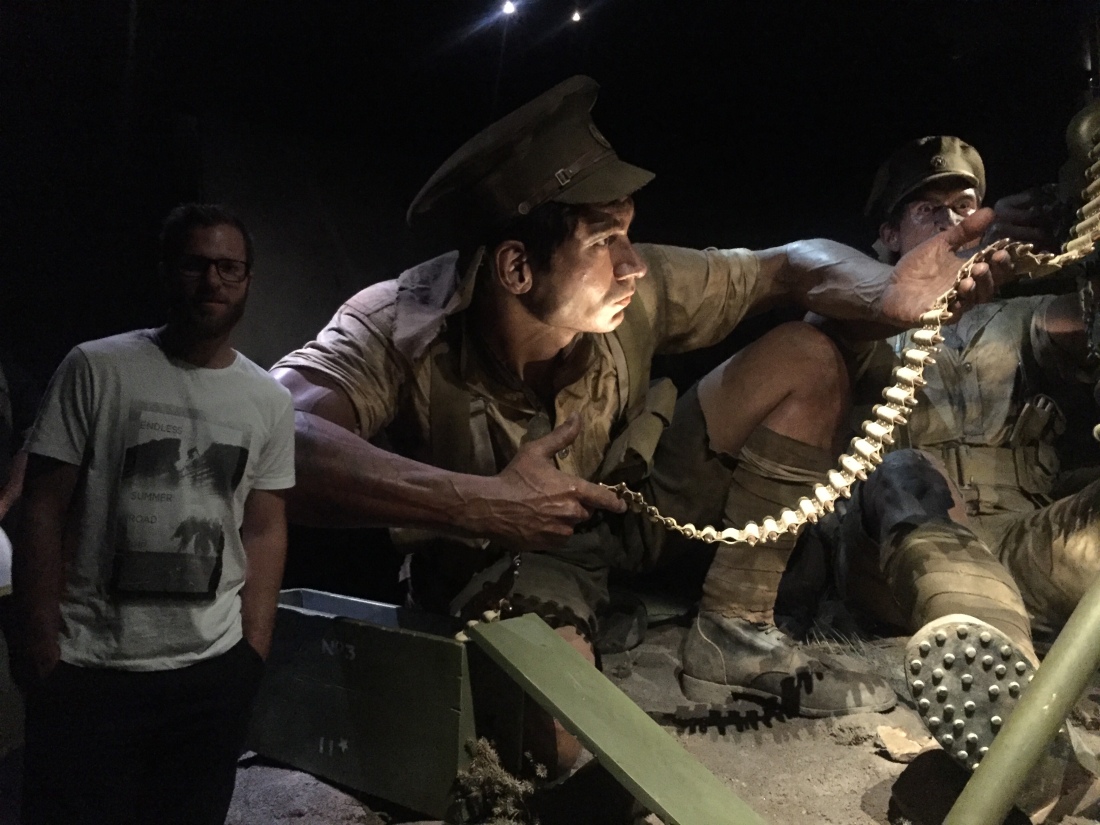 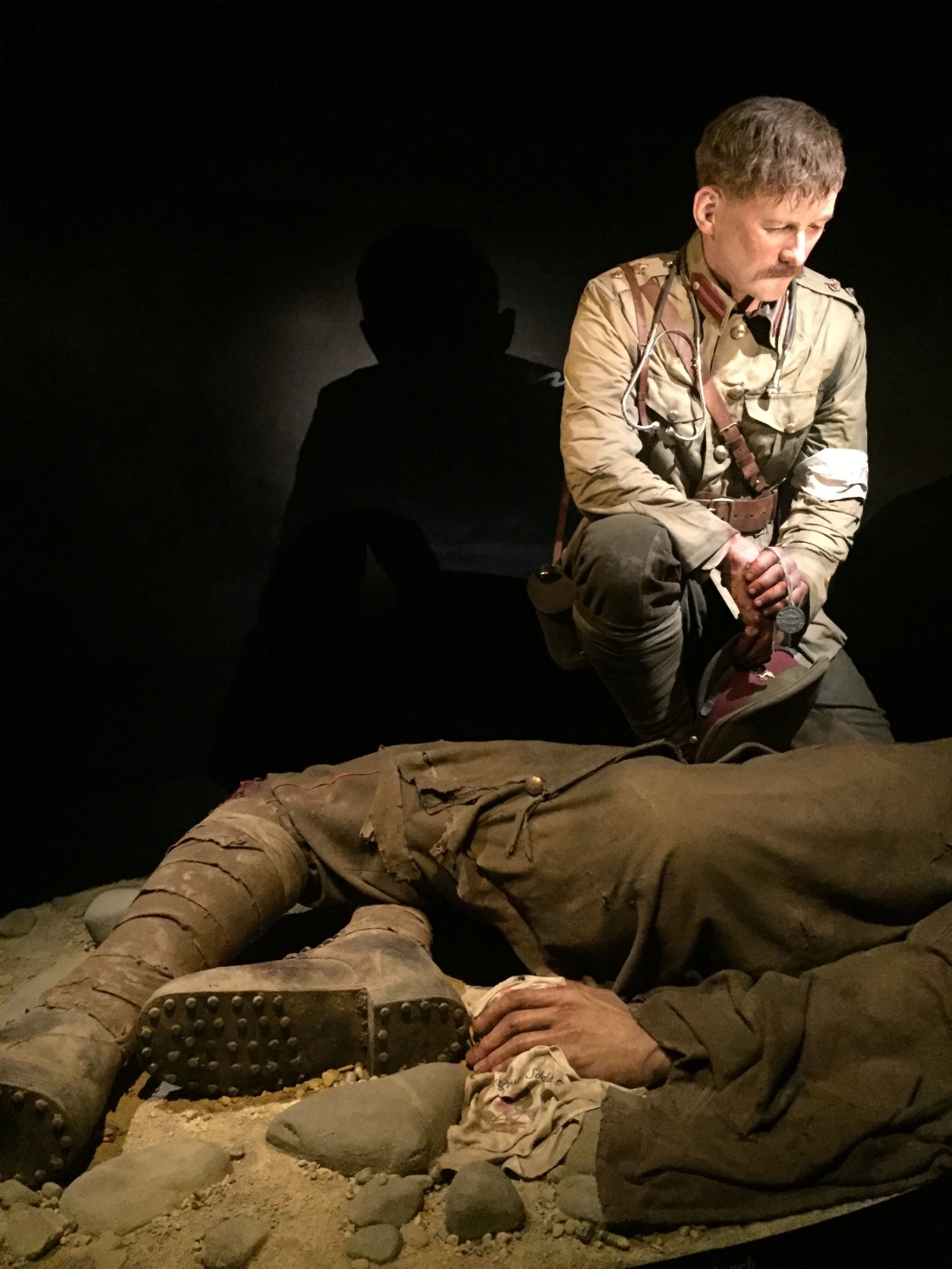 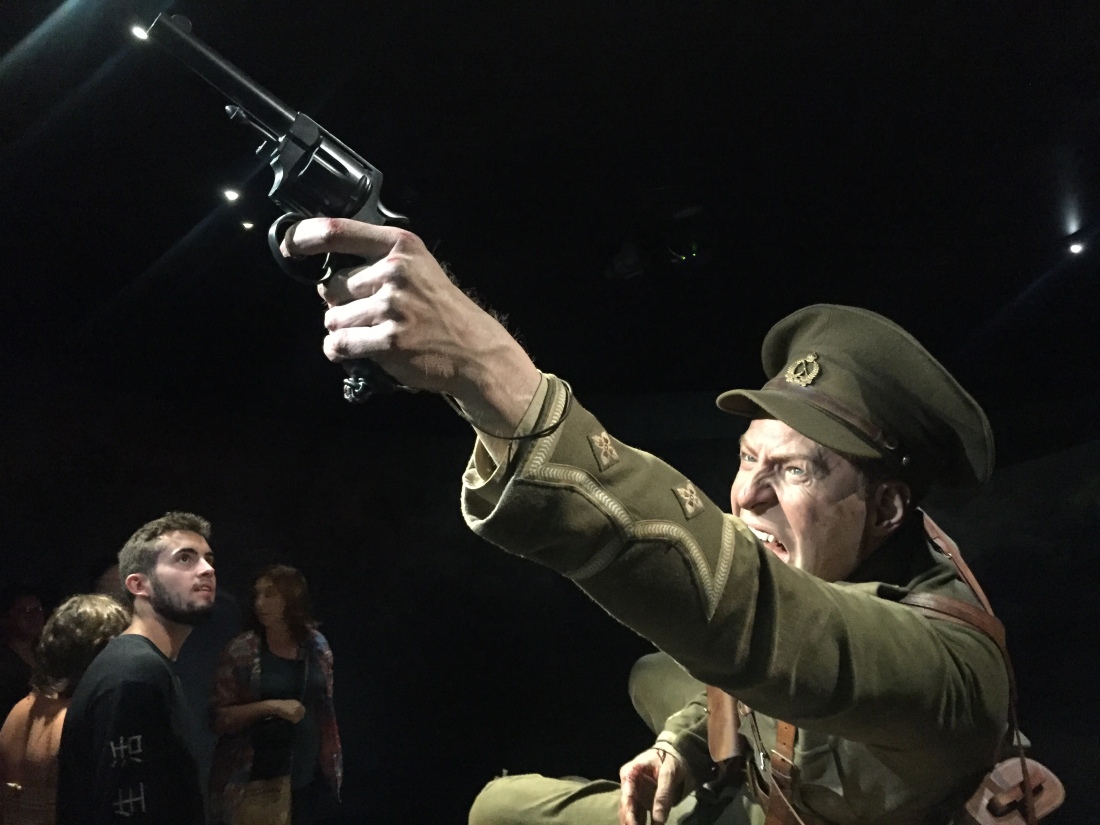 Next, we headed to the waterfront to walk more of it, and grabbed a coffee. This was a relaxing part of the day, and was a peaceful stroll. 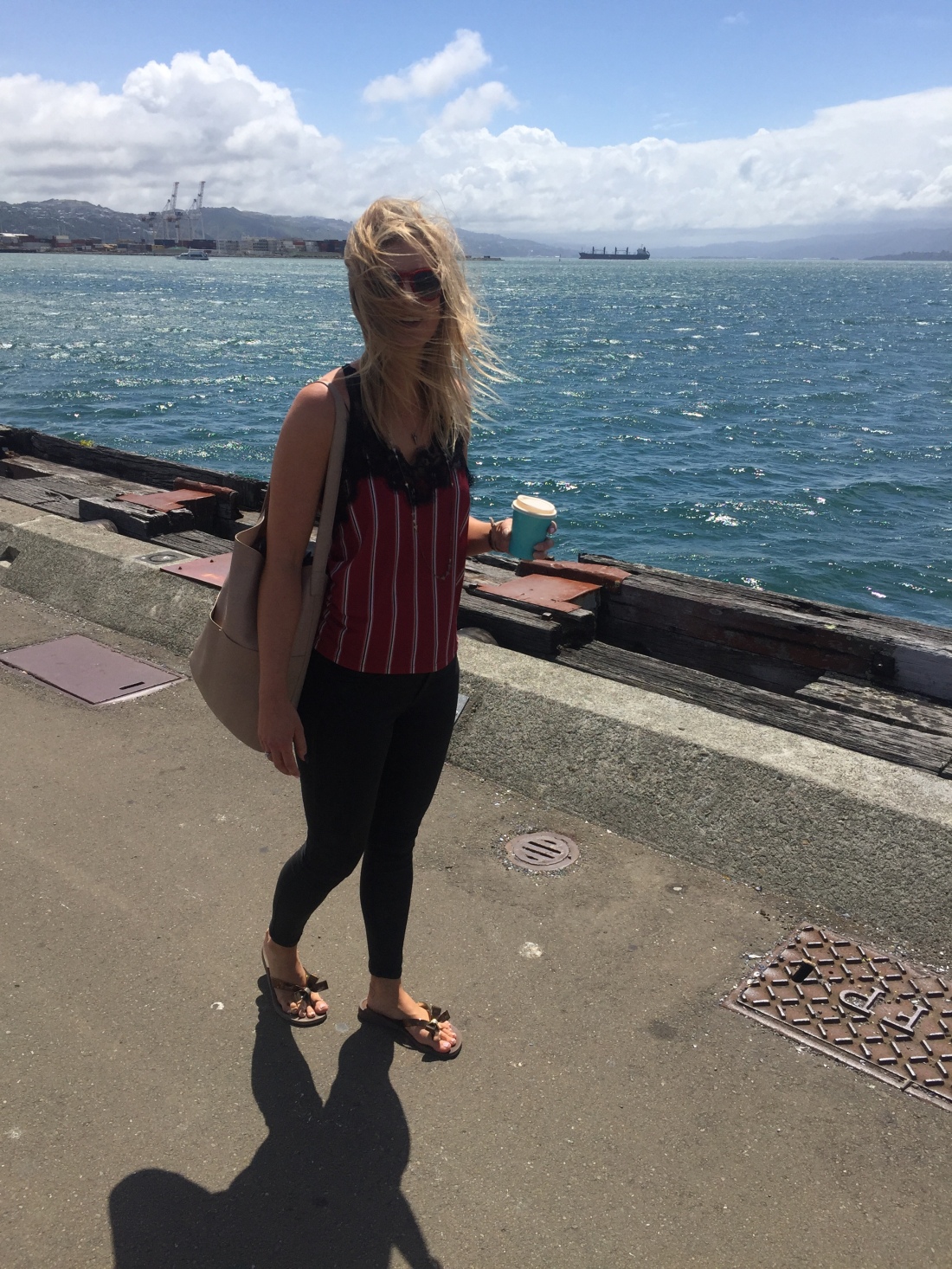 The wind was intense! I had been warned of the Wellington wind, but didn’t quite comprehend how fast it actually is! I literally had to hold my sunglasses on my head because they were blowing off. The wind actually pushed us along if it was behind, and we had to lean into it if it was in front. I had to tuck my shirt into the front of my pants to prevent it from whipping up!

We eventually found the cute huts at Oriental Bay, and then headed to do some breweries for Greg! 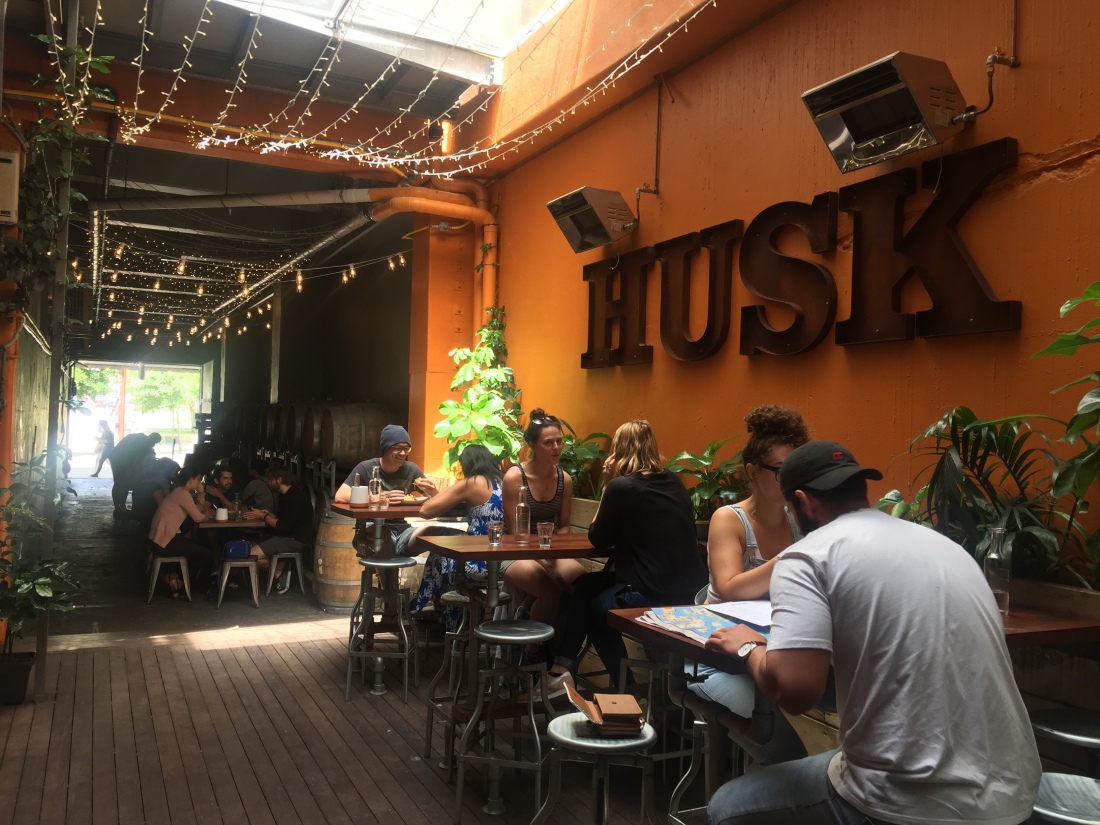 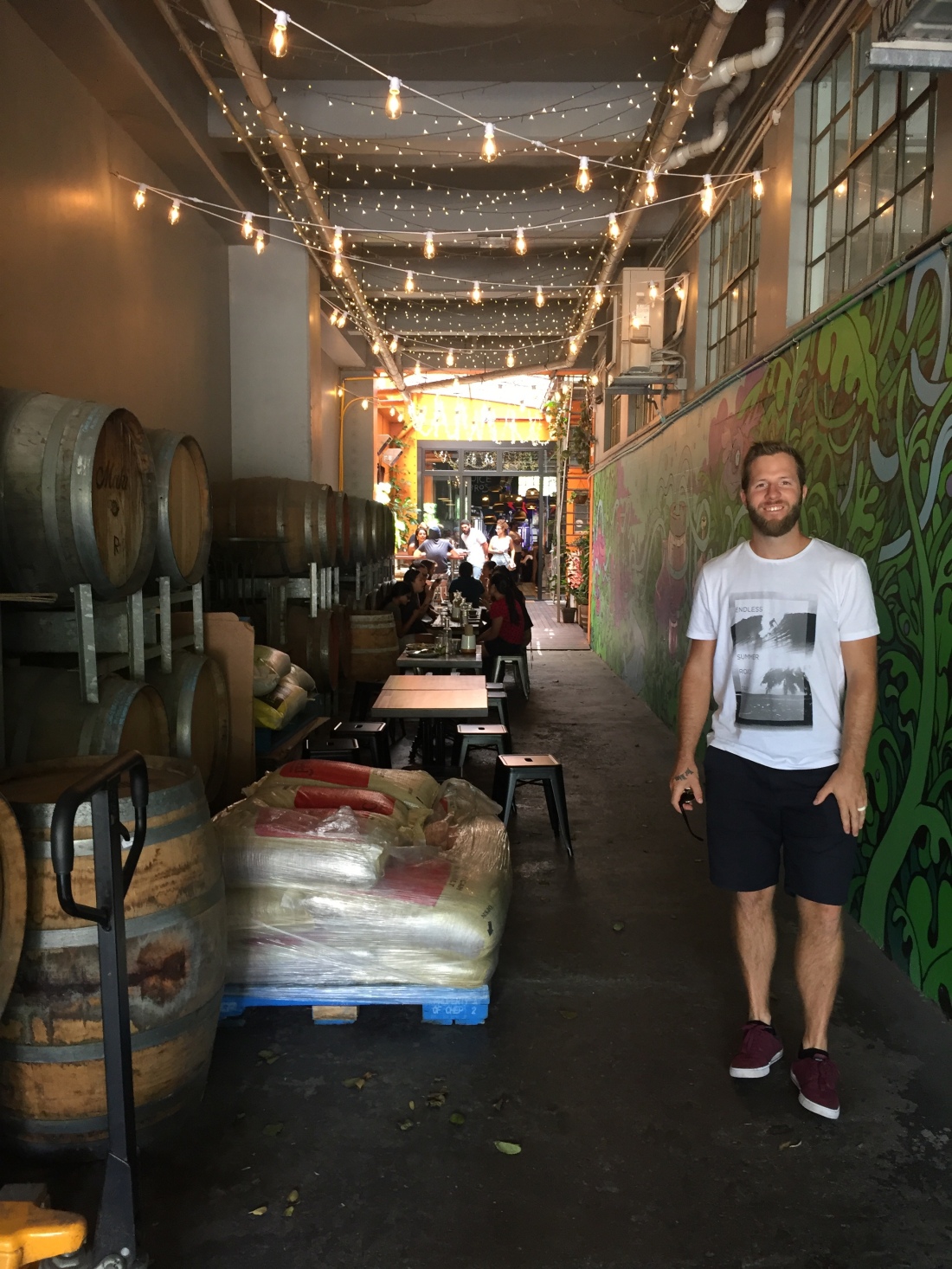 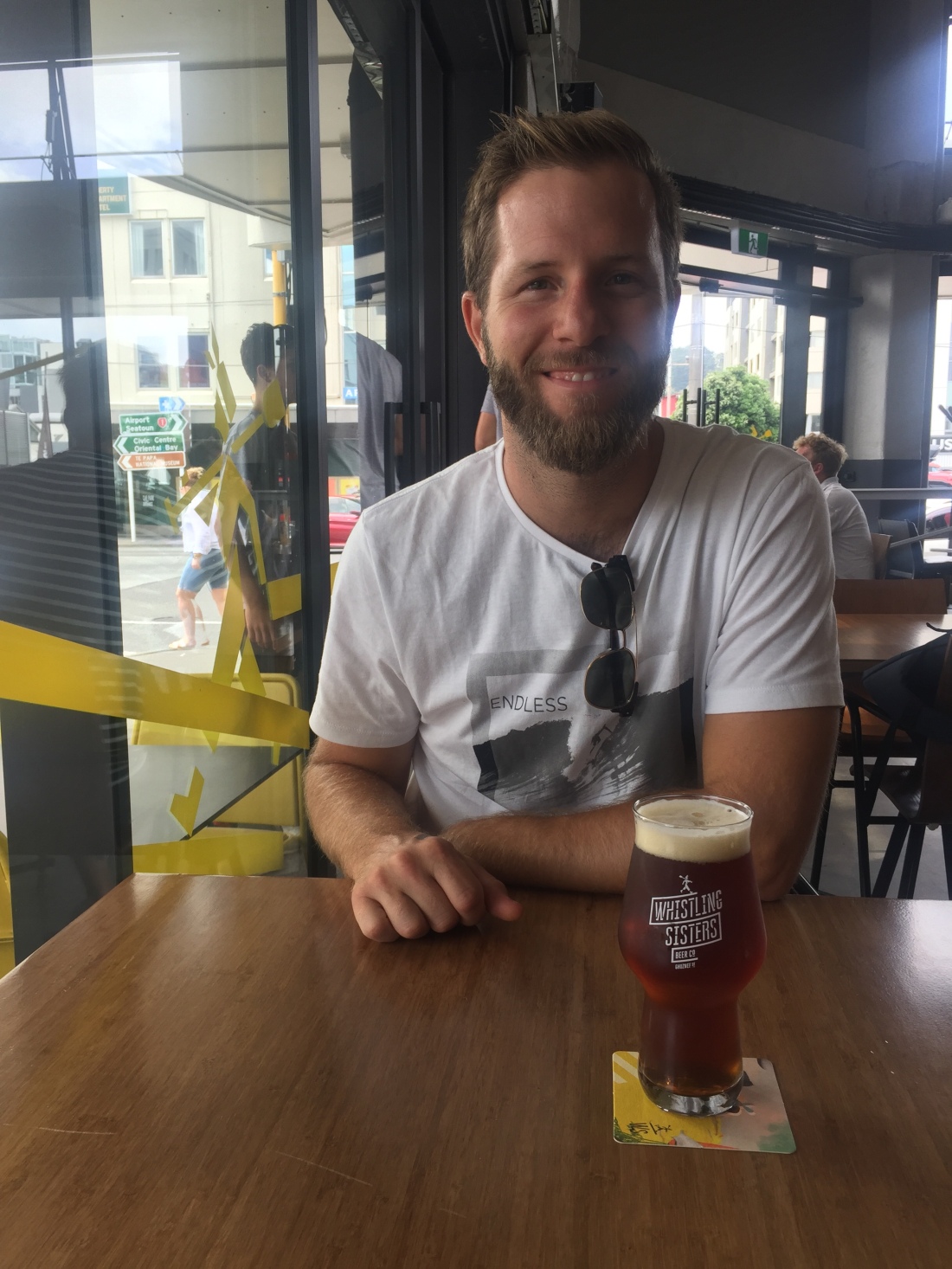 Wellington has a really big craft beer scene. We went to Husk first, that features Choice Bros brewing, and great food, and then to Whistling Sisters. Greg found most of the beer very good; his favourites still lie in other parts of the world, but he really liked lots of the Welly ones.

We did some wine shopping at Moore Wilson’s and Glengarry, and were excited to find some wine from other parts of the world. We’ve got a craving for a good Napa or Sonoma red, but we haven’t found that yet. (Do we want it just because we can’t find it?)

The last stop was at Starbucks, for the New Zealand souvenir mug, and an Americano. To be honest, I’m starting to get used to New Zealand’s amazing coffee, and how rich and velvety it is, with a nice foam to it, that I found the Americano a bit lacking; however, it was a weird sized cup and had too much water for the amount of espresso, and it also didn’t have the same flavour as in Canada. I don’t blame anyone, but they’re competing with so many other amazing coffee shops; if Starbucks wants to become more popular here, they need to up their game. (Disclaimer: I will always love Starbucks.) We can’t use our app or gold cards here, and they don’t have the oatmeal, but I did get my Americano free with my mug. The mug was $30 here (yikes) but Switzerland still takes the prize for “most expensive we’ve seen” at somewhere around $32 – $34 Canadian. The Starbucks people probably think I died, seeing as how my gold card, that used to get several purchases a week, went from full on, to absolutely nothing the day I left Canada. If anyone from Starbucks is reading this, I am alive, and I still love you. 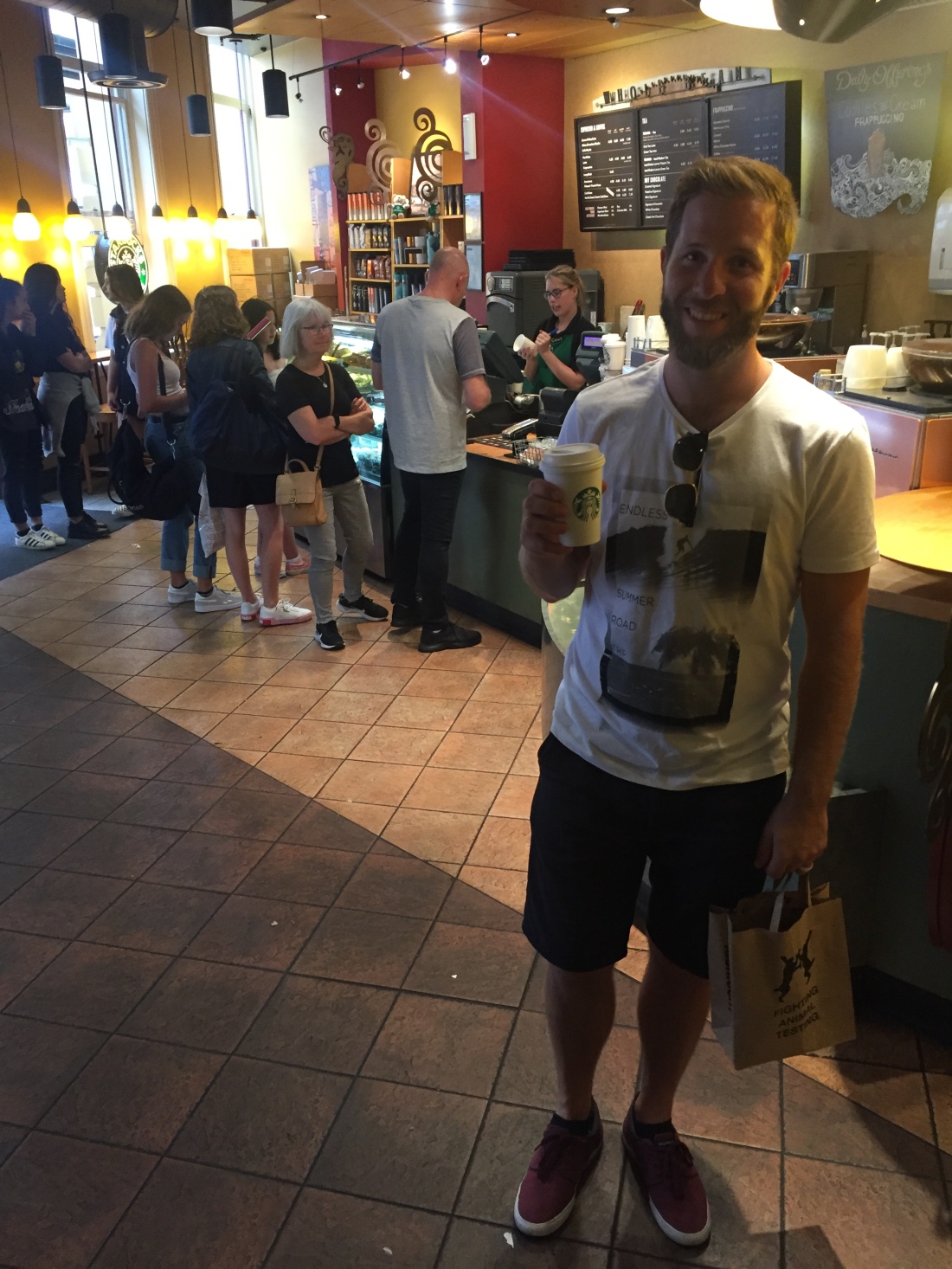 We enjoyed the ride home, as it is a really beautiful drive through mountains, with lush greenery, and several cute towns, one of which won New Zealand’s most scenic town recently. 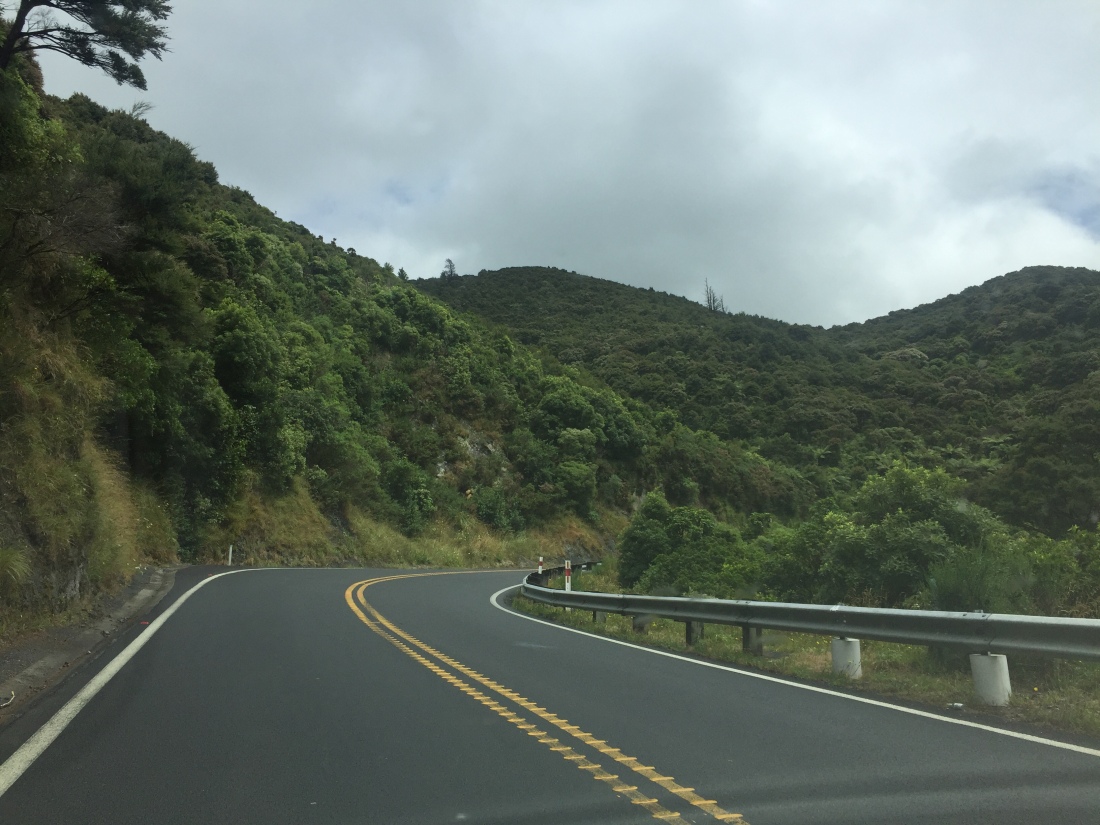 I said to Greg before the trip that I wanted to have a relaxing weekend in Wellington, as I have been so tired from work and not sleeping well due to our almost 30 degree nights (poor me, right?). If you know me though, I always try and fit as much in as possible on a trip, because I like to take advantage of being in the place. I have to go back more than once to be able to fully relax in any place! This weekend, no matter how much I thought we’d relax, was not relaxing, but it was full of sight seeing, and we felt like we were on holiday! I said to Greg at one point, “doesn’t it feel like we just flew here and we have to fly back to Canada soon? But we don’t. We will just drive back home and go to work tomorrow.”

I’ve also noticed there’s nothing that makes me feel more at home in Napier than leaving it, and then getting that comfortable feeling of coming home when we return to Hawke’s Bay. We’ve definitely ended up living in the right place for us, and it’s feeling more like home every day.

Our weekend in Wellington was short and sweet, and we’re happy to have seen the city; we’re also happy to be home… until the next time!

2 thoughts on “A Weekend in Wellington”