This is an exciting blog post for me, as I get to highlight the city Greg and I call home in New Zealand. (The 1920’s/1930’s photos you’ve seen of us will make more sense once you’ve read this article as well!)

Nothing will prepare you for what Lonely Planet describes as the ‘charismatic’ New Zealand city that ‘can provoke a Great Gatsby swagger in the least romantic soul’.

(Facts in this article are taken from this website, as well as what I’ve learned from Napier citizens during our time here.)

The Art Deco story all began when the people of Hawke’s Bay experienced a devastating earthquake on the 3rd of February, 1931. The quake measured 7.8 on the Richter scale, and was the largest in New Zealand’s history. It killed 261 people in the Bay, 162 of which were from Napier City. After the quake struck at 10:47am, fires broke out in the cities of Hastings and Napier. Hastings was able to control their fires, but Napier wasn’t, and the city was largely destroyed.

The land shifted and tilted up 7 feet, and the sea line extended out east. According to artdeconapier.com, Napier gained 5575 acres of land. The land was drained and is now where a lot of our city sits, including the new downtown, and the Airport.

The people rebuilt the city in the early 30’s, with what was the popular 20’s fashion at the time, Art Deco. Our city is filled with Art Deco buildings and street signs, gardens and homes, artwork, and lots of old cars we see driving around during the festival, and all year. It’s a very cute city to visit, and is a stop for most cruises that come through. The most photographed building and statue in New Zealand are in Napier. 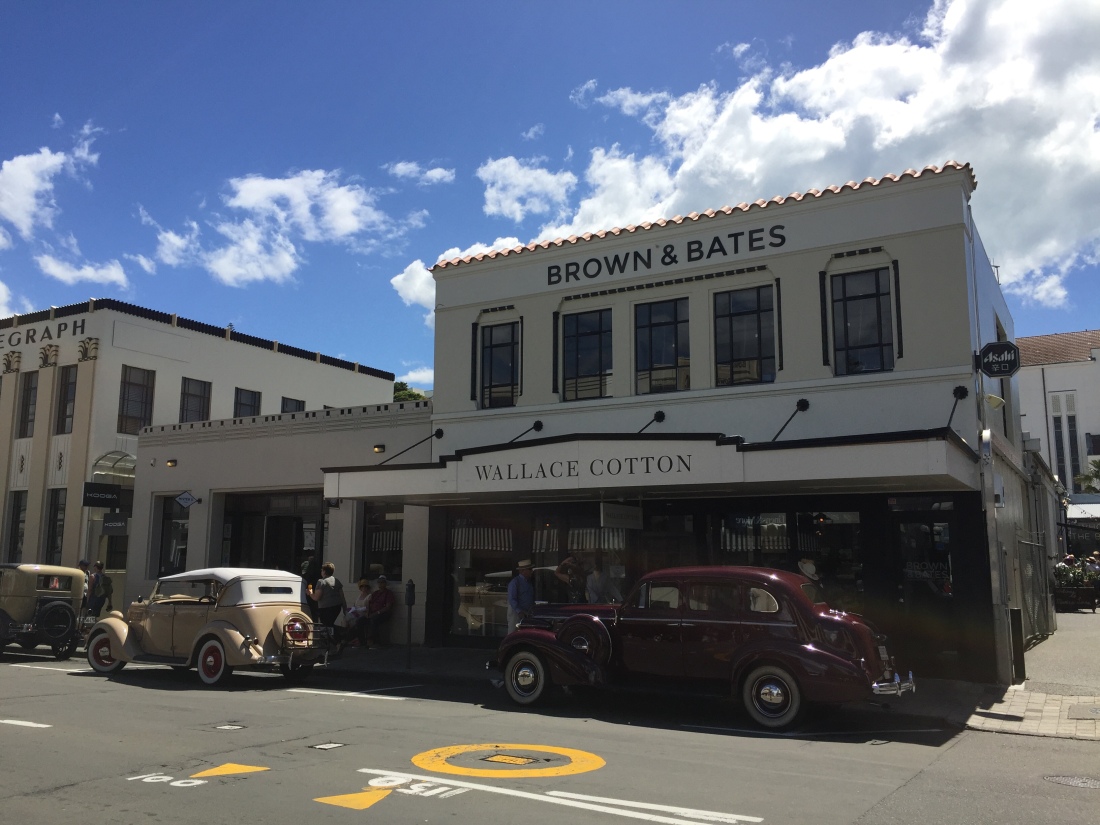 The Art Deco Festival is an annual event that allows the citizens of Napier to showcase the history of their home, share their story of survival, and celebrate it’s rebirth. It’s a time for people to come together as a small community, and honour the past in a meaningful and fun way! Kiwis come from all over New Zealand to participate in the festival; tourists come from Australia, and even places as far as Europe to participate! The 2019 festival was the 31st annual celebration, and according to media.newzealand.com, there were over 300 events, and 40,000 guests in attendance.

There were both ticketed and free events to participate in. We kicked the festival off with an Art Deco Valentine’s Day; we had a walk around after dinner, and some wine at a cool wine bar in town where we listened to old music and watched the customers dance the night away.

Greg and I went to the opening ceremony on the Friday evening with friends, which consisted of the first fly over of the old war planes. They did tricks and put on a show that everyone gathered along the shoreline to watch. 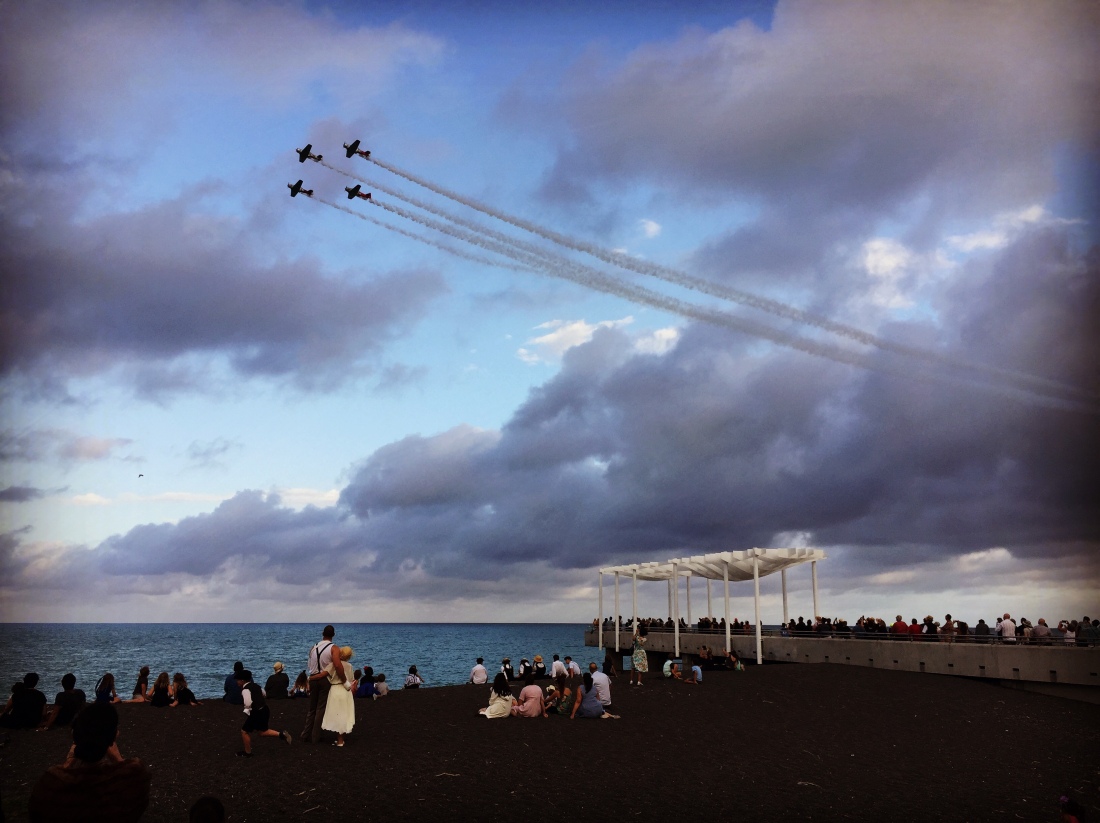 Almost everyone who’s out gets involved in the festival. As we sat on the beach with our friends later that night and looked around, it actually felt like it could have been the 1930’s. 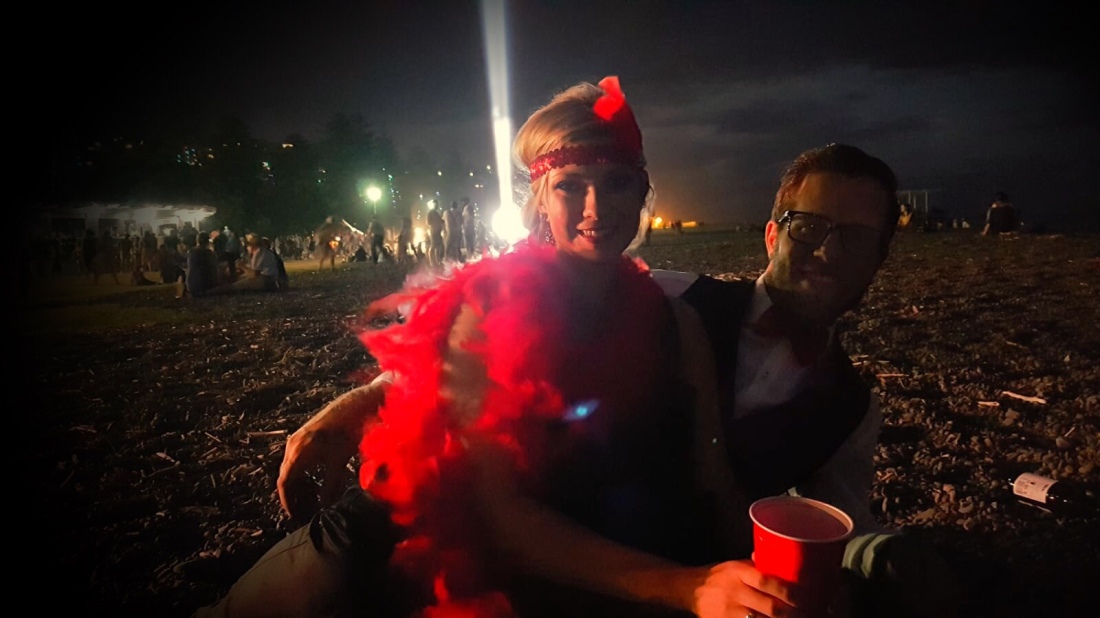 Little kids were dressed in their 20’s/30’s gear and playing catch by the ocean with their parents. A group of teens were dressed the part, lazing on the beach nearby, drinking and laughing. Seniors had old tables and chairs set out on the lawn, with full spreads of classic China and glassware, and were enjoying a picnic while decked out in top hats and pearls. 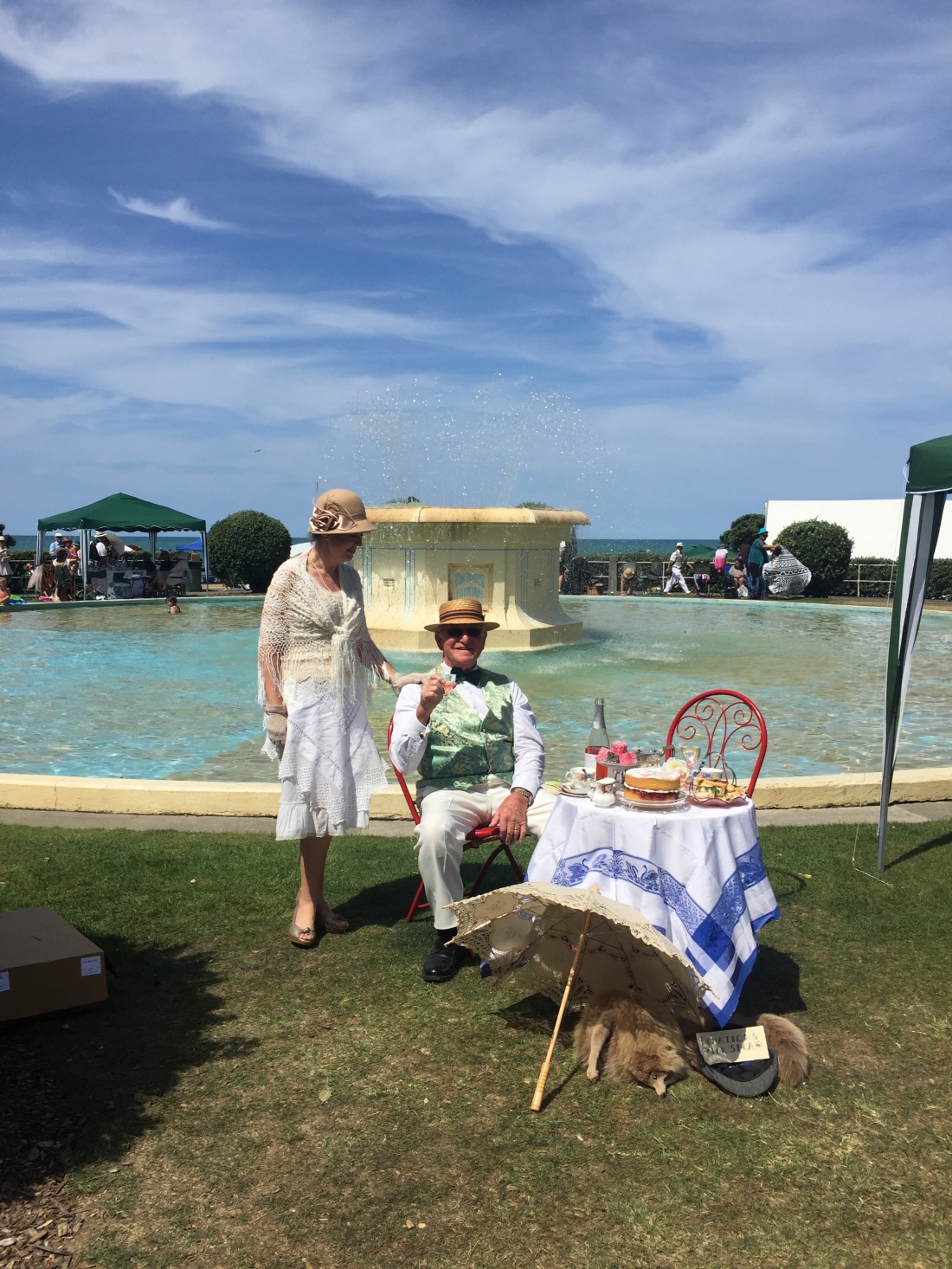 There was a live orchestra and band performing 1930’s music, and people were dancing in the parks and in the streets. As we made our way around, we took time to stop for a chat with a familiar face, admire a beautiful car, have a photo, or just take it all in with the numerous groups of others around us doing the same. 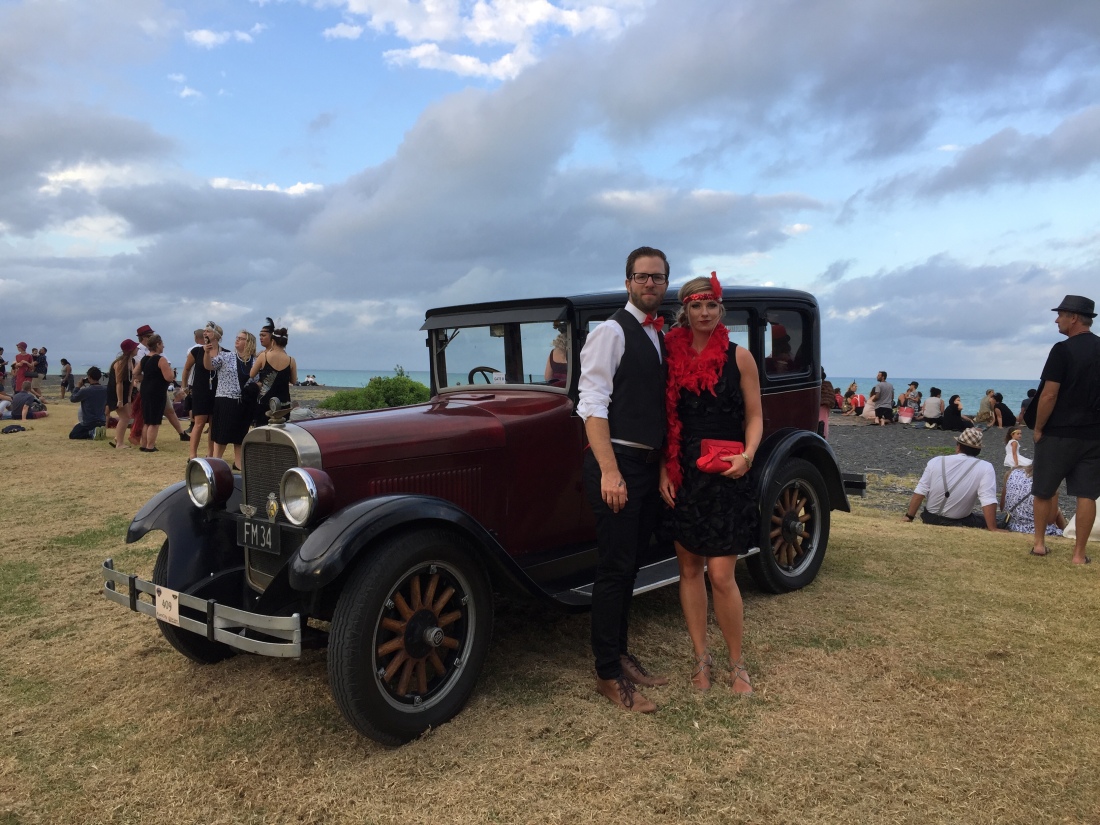 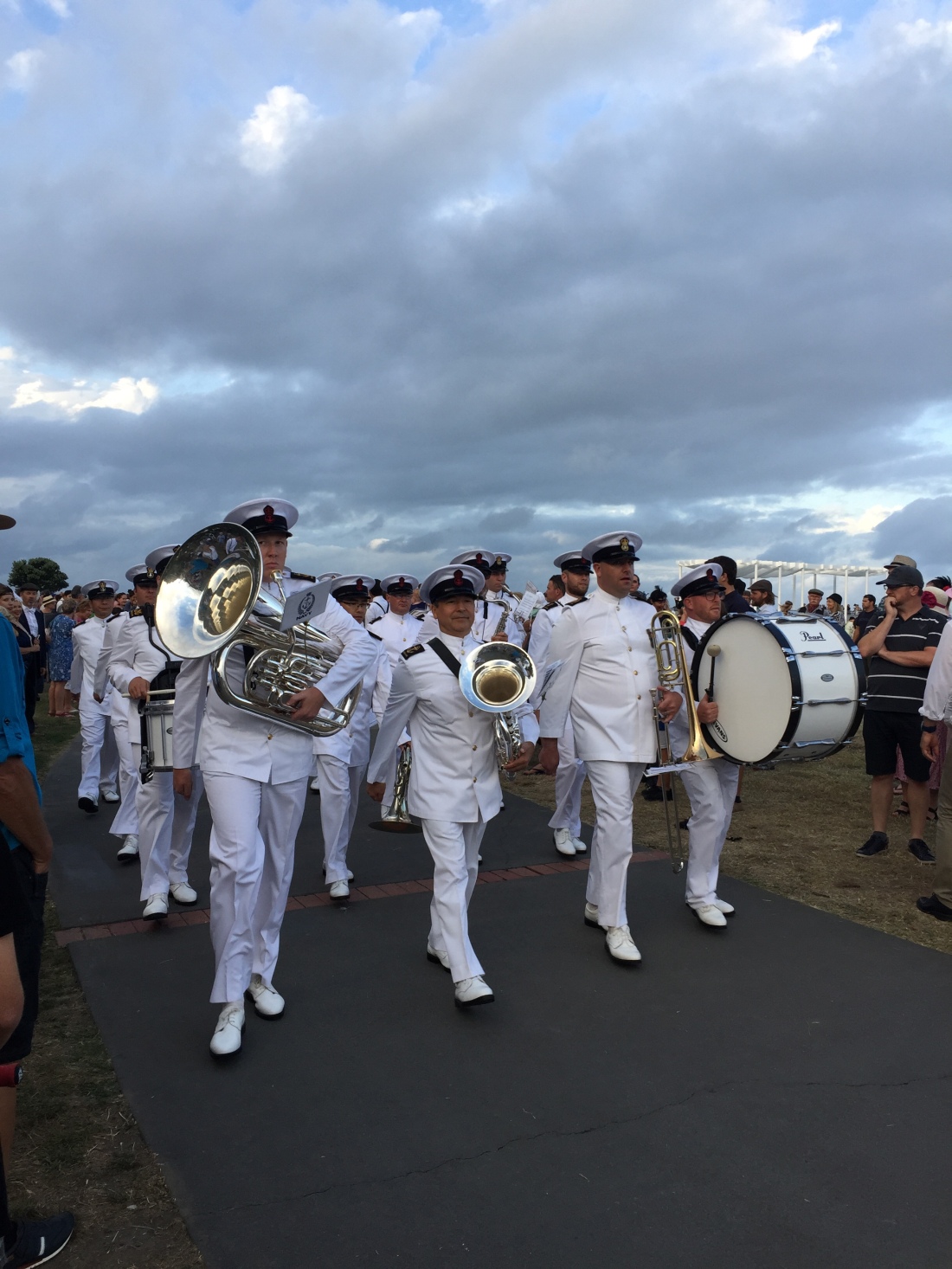 Walking through the downtown streets, seeing every person in 1930’s dress, looking at the old buildings and cars, and hearing the music, I felt like we’d all travelled back in time.

We also spent some time walking around on Saturday, seeing the old car parade, old motorcycles, and a fashion show. 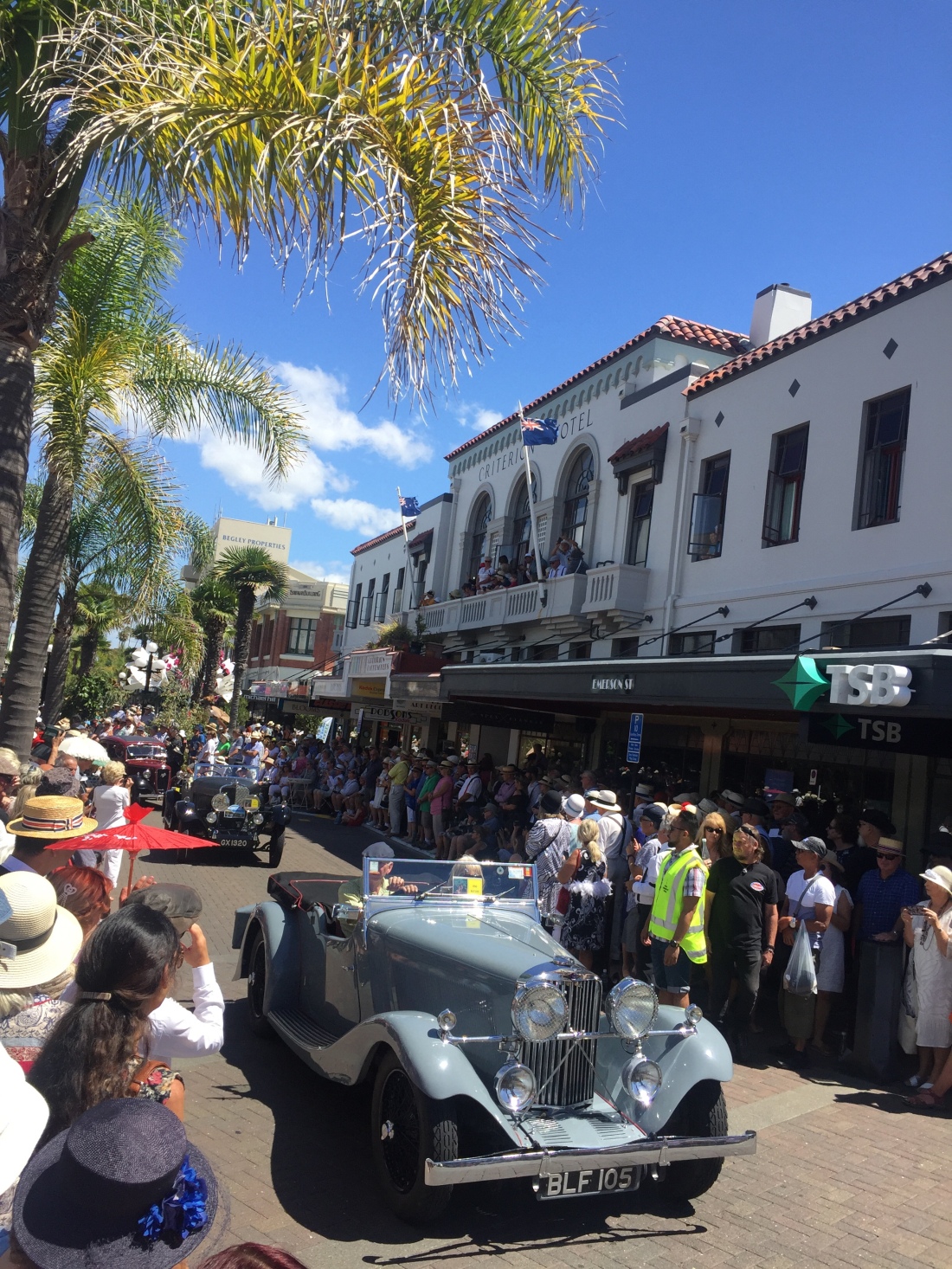 There were numerous musical groups to be spotted all around town. 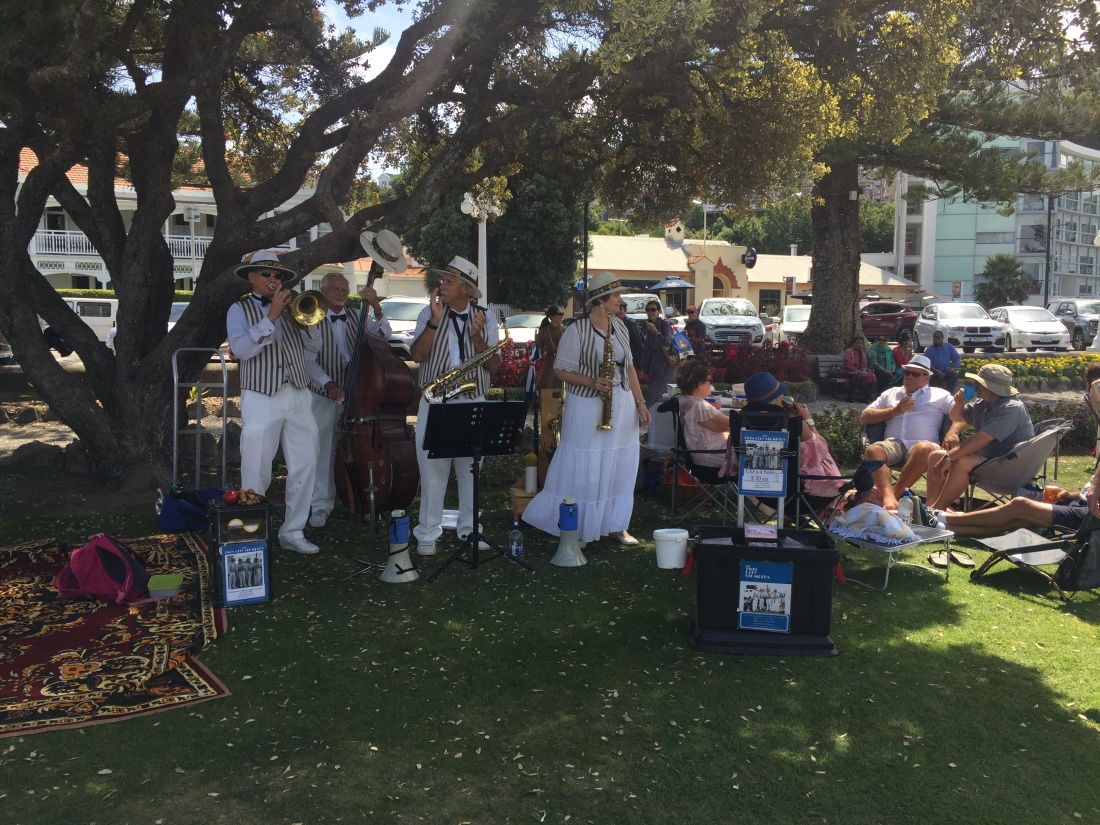 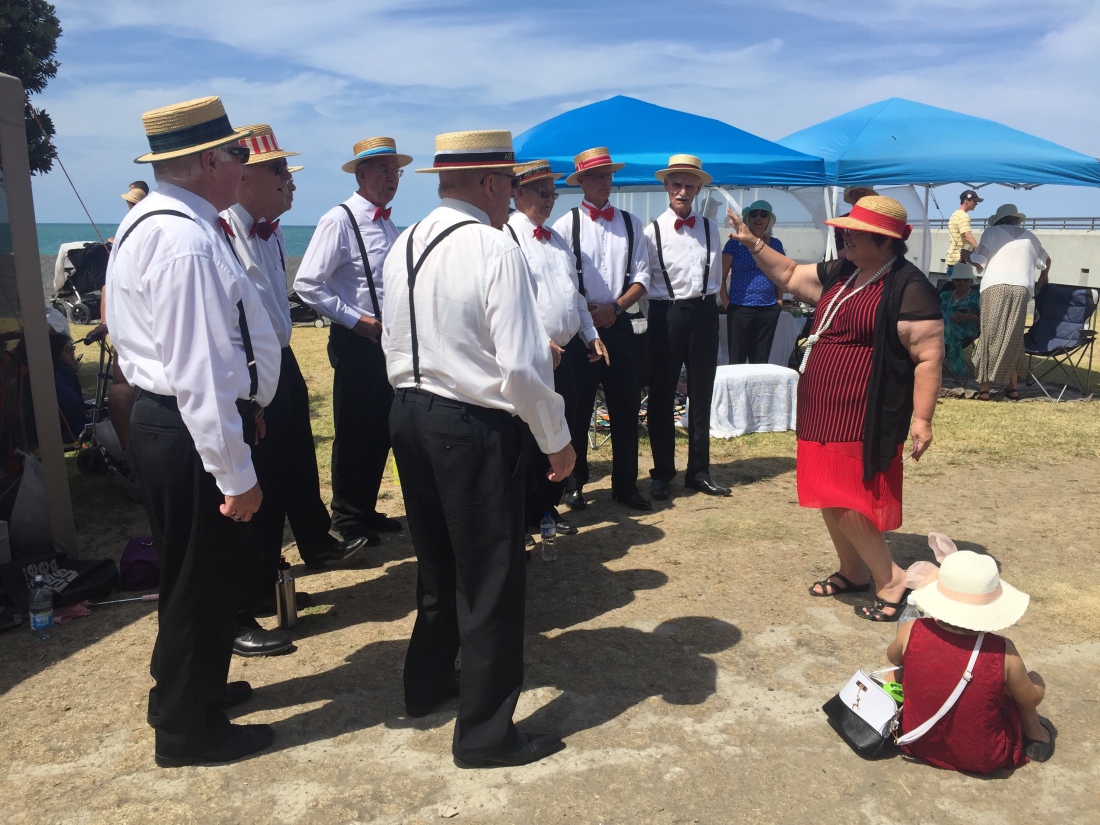 We attended the Gatsby Picnic on Sunday, and had our lunch there.

We were, again, awed and entertained to see how many people went all out to participate in this event. We’d heard that many of them go each year at 4:00am to get the best spots and set up their themed gazebos. Some of them were absolutely amazing! 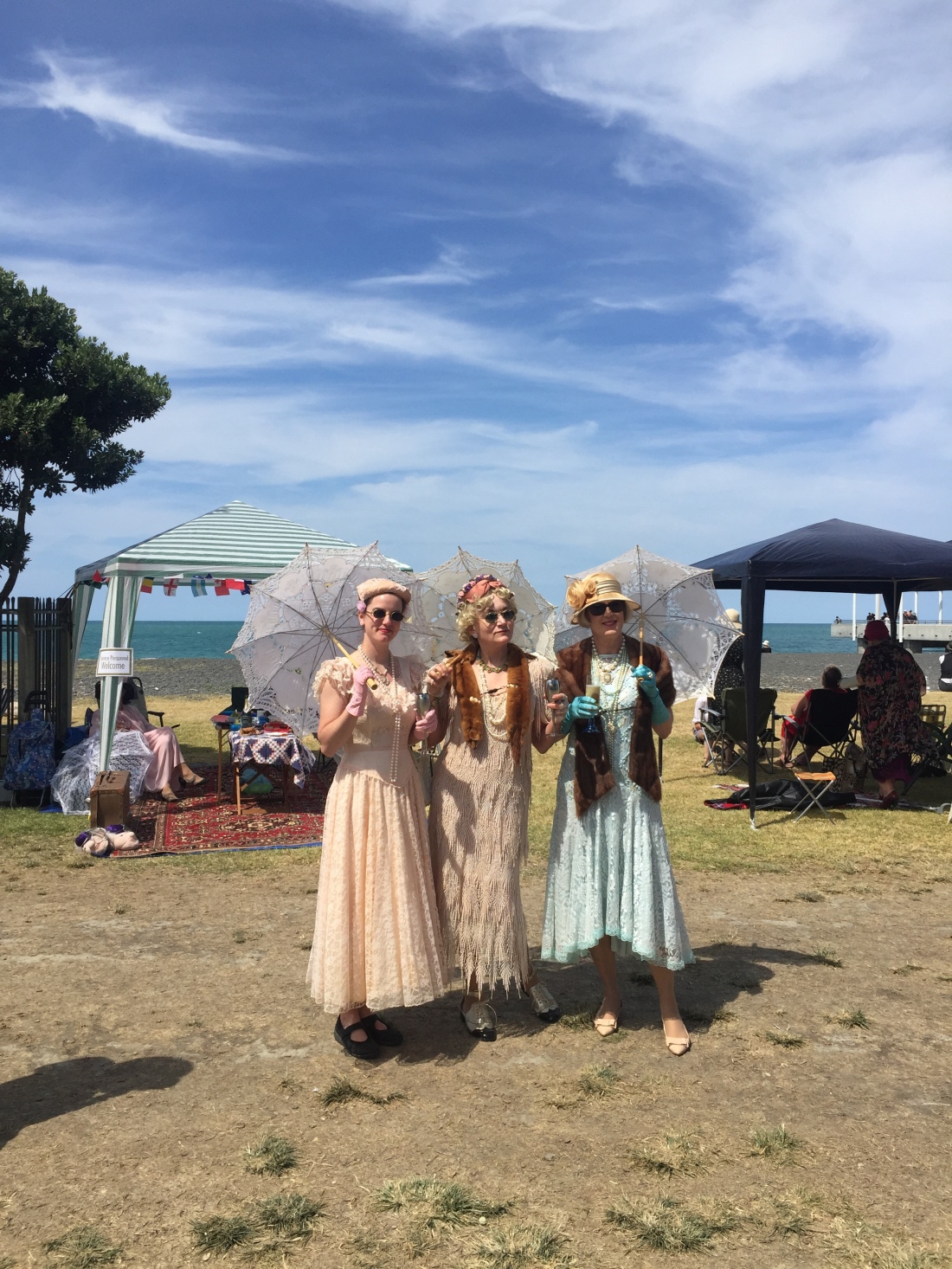 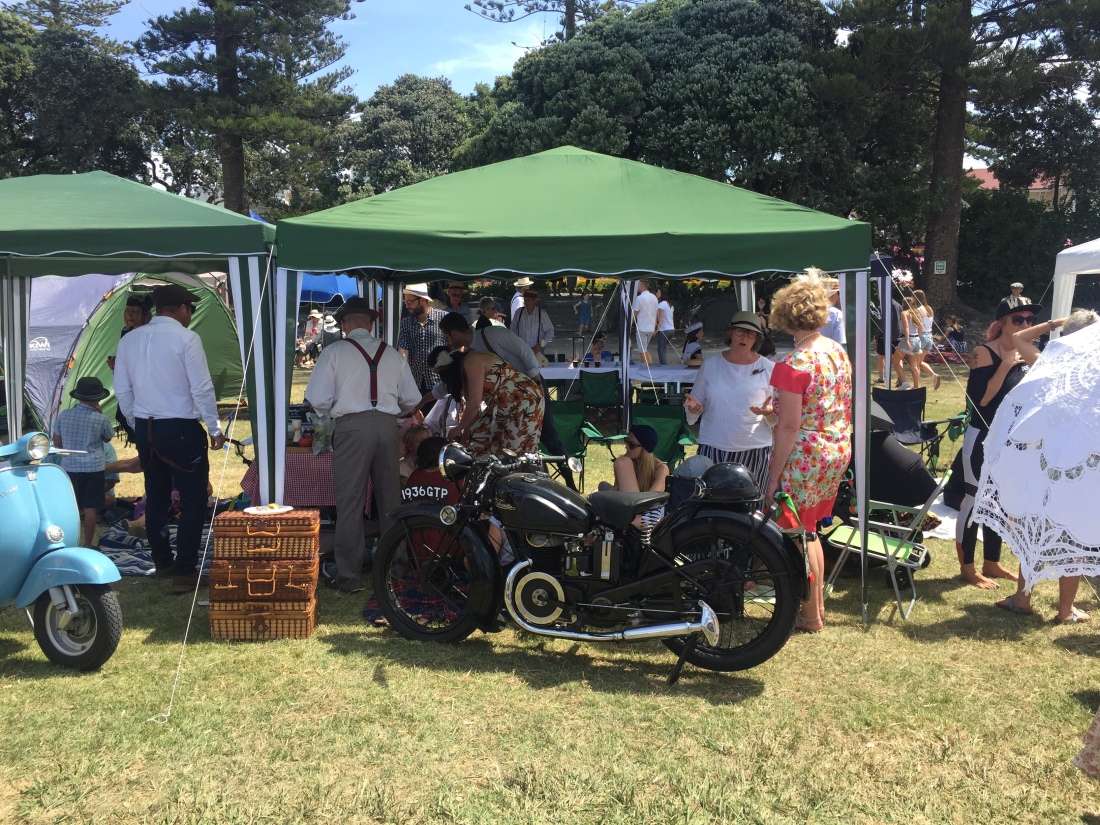 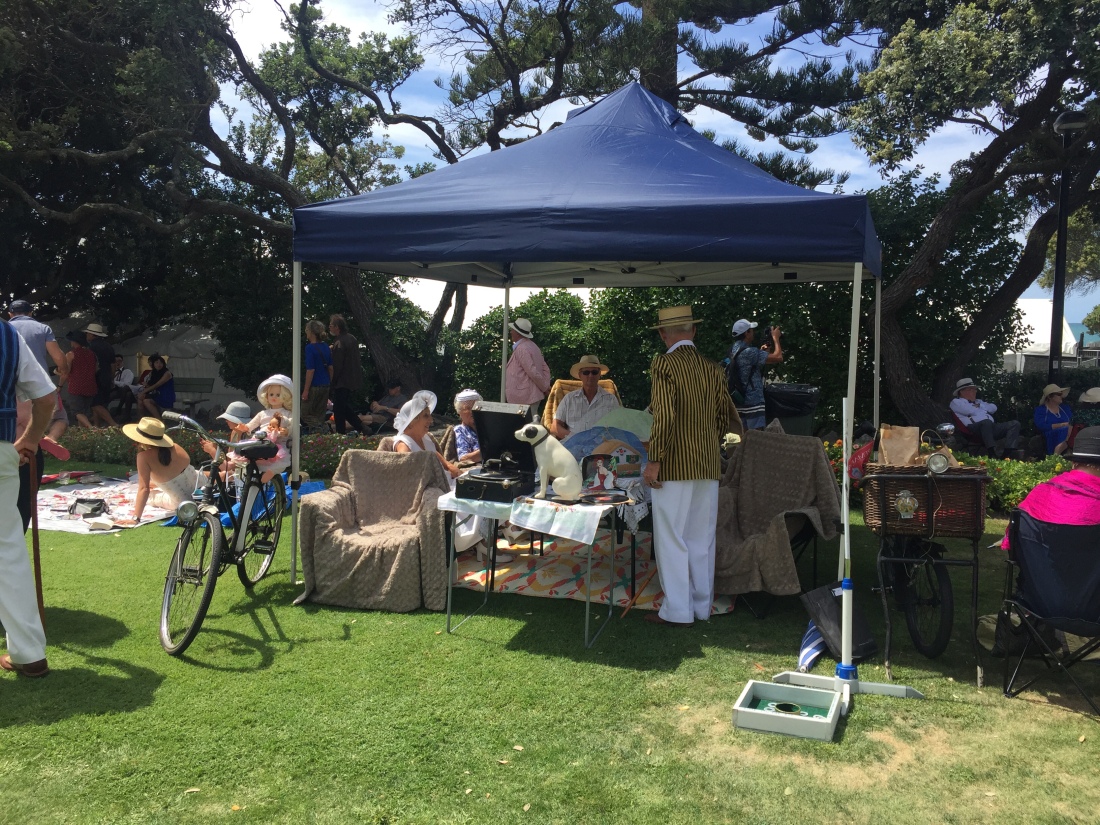 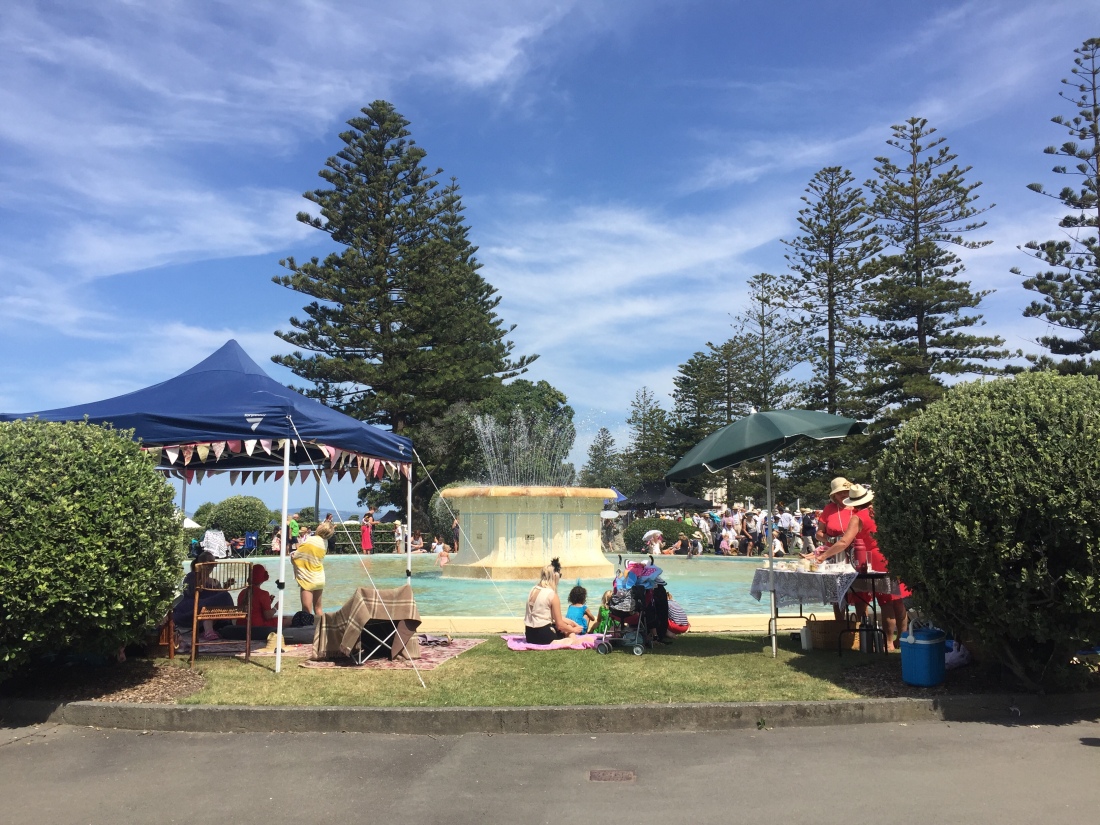 Being part of the festival was a special experience, to say the least. We both talked about how an event like this just wouldn’t work if the people didn’t get so into it. I believe the enthusiasm the locals show, young and old alike, is what makes the festival really successful each year. There’s something truly magical about watching an entire community fully embrace the spirit of the time, and come together in a significant way.

We loved Napier already, but celebrating it’s rebirth as part of the community this festival made us love it even more.